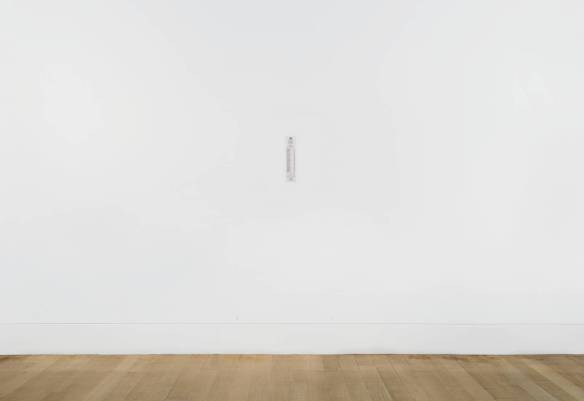 This wasn’t what I expected to write about next. In fact, when I thought about writing about Ceal Floyer’s work it wasn’t this work that had popped into my head but, once it had, it wouldn’t make way for anything else. Regular readers will know that I do tend to like work that’s white to the point of almost vanishing into the wall and that I find the strategy of showing a tiny work on a big empty wall appealing. It must also be fairly apparent to anyone that’s read more than a few posts here that I do like work that makes me smile. When these two things coincide, so much the better.

END_OF_DOCUMENT_TOKEN_TO_BE_REPLACED 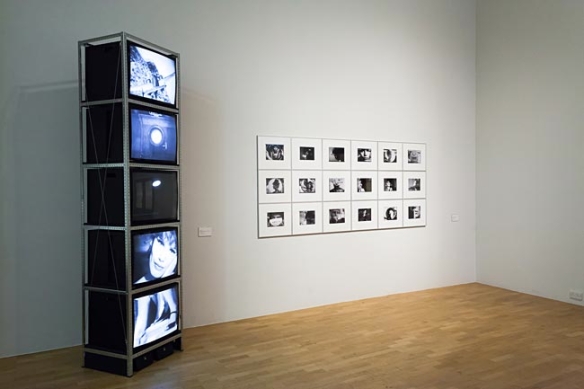 Chris Marker, A Grin Without a Cat installation view

I guess it’s seeing the two within a week or two that means that Richard Grayson’s Nothing Can Stop Us Now reminded me in a way of Chris Marker’s Silent Movie which is included in the Whitechapel Gallery exhibition Chris Marker: A Grin Without a Cat. The connection is a simple but somewhat tenuous one: both works feature five monitors. In Grayson’s piece, these run in a horizontal line across the front of the space using the full width of the building. In Marker’s Silent Movie the monitors are in a vertical tower. The tower is a bolt together structure which is both the simplest solution to housing the monitors and also, in its industrial simplicity, somewhat constructivist in feel.

END_OF_DOCUMENT_TOKEN_TO_BE_REPLACED

Richard Grayson, Nothing Can Stop Us Now, 2014 (video still)

There’s something about the image on the Matt’s Gallery website to promote Richard Grayson’s Nothing Can Stop Us Now at Dilston Grove that makes me think of The Apprentice. I guess it’s the slightly upward camera angle and the way the group are gathered in front of a building that immediately suggests high finance. The five people in question – Leo Chadburn, Bishi, Laura Moody, Tom Herbert and Sophie Ramsay – are the performers in Grayson’s multiscreen sound and video installation at Dilston Grove, a former church in Southwark Park. The image is a screenshot from one of the five screens that see the performers congregate outside locations that of cultural, political and financial importance. That the act of gathering outside such locations now speaks both of solidarity and protest and of competition and capital and the power of the media is interesting in the context of the work.