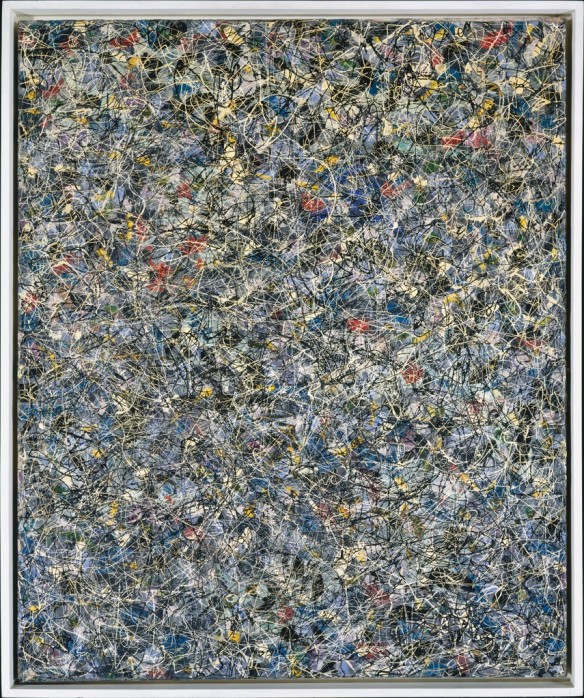 After I came back from a trip to New York with students in the spring I wrote a lot here about the art I saw in galleries there. One thing that I didn’t write about at the time was a small painting I saw at the Metropolitan Museum; the relevant page on the Met’s website has been open in a browser tab on my laptop ever since I think, but it was seeing Mel Brimfield’s Clement Greenberg – Lee Krasner = Jackson Pollock that brought Lee Krasner’s painting back to mind. Though Krasner’s career was played out in the shadow of that of her husband Jackson Pollock, her contribution to twentieth century American modernism, and to abstract expressionist painting in particular, was considerable. Unlike Pollock’s action paintings, this work is modest in scale 76.2 x 63.5 cm to Autumn Rhythm‘s 266.7 x 525.8cm and the painting seems to me to be much more about the outcome than the performance of making it.

The small scale and intricacy of the painting gives it an intensity that Pollock’s work, which I also love but for different reasons, lacks for me. The use of colour is subtly beautiful and the surface becomes almost like a landscape. Krasner’s painting was one of the highlights of the afternoon spent at the Met and not just because the stats from the Guerrilla Girls posters were also on my mind.

It’s no great surprise that in an art world – and indeed a society – dominated by men, Krasner was defined more by her marriage than her work. The list of women artists overlooked or marginalised by art historians would doubtless be a very long one if we knew a more than a fraction of the names that should be on it. Though Krasner’s work is in museum collections it’s rare to see a mention of her that doesn’t also mention Pollock – and yes, I’m fully aware that I’m doing that too – whereas Pollock is more likely to be discussed in other terms. In part of course, as custodian of her husband’s legacy after his early death in 1956, Krasner could be seen as having contributed to her own marginalisation though she was hardly likely to walk away from that responsibility or leave it entirely to others to maintain his status and reputation.

11 thoughts on “In the shadows”