Jake and Dinos Chapman, Great Deeds Against the Dead, 1994

I’m sure there are other examples out there, but it seems to me it’s comparatively rare for reworkings of existing art to involve the move from two to three dimensions. Painting to photography, yes; printmaking to sculpture, no so much. But with a long-standing fascination with Goya’s portfolio of etchings The Disasters of War, that’s the approach Jake and Dinos Chapman took when making their sculpture Great Deeds Against the Dead. 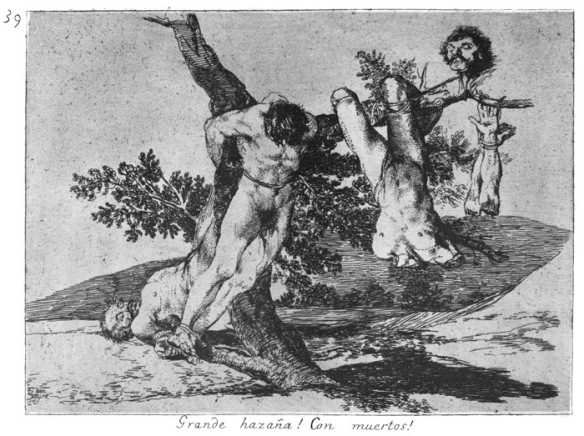 The Goya etchings tell of the horrors the artist witnessed during the peninsular war between Spain and France which took place between 1808 and 1814. In depicting the brutality of the war in graphic detail and drawing attention to the awful human cost of such conflict, the portfolio acts as a powerful anti-war statement. Though the etchings clearly retain their power, we are now so inured to hyper-real images of violence in films and the gruesome reality of war photography that translating the imagery to three dimensions is perhaps the only approach left to really bring home the dreadful reality of the worst excesses of man’s inhumanity to man.

Clearly with work of this nature, the Chapman bothers open themselves up to the criticism that they are just trying to shock. While it’s doubtless true that they are trying to shock, that’s not all they’re trying to do. In an age when violent images abound but when real war is a mediated experience with the battles fought elsewhere and beamed into our homes on the evening news, it’s surely no bad thing to come face to face with something that provokes a visceral response. 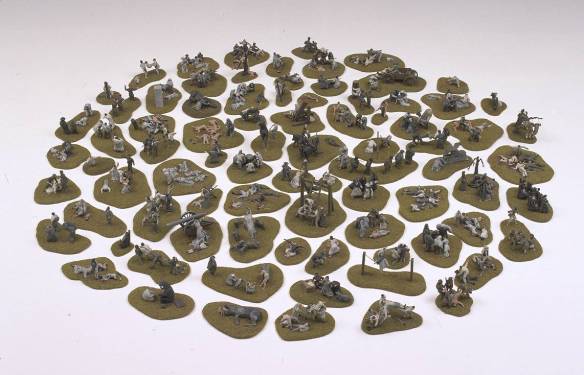 Jake and Dinos Chapman, The Disasters of War, 1993

The Chapman brothers’ first translation of Goya’s prints was the work The Disasters of War, an installation of small-scale sculptures of each of the etchings. Though here there is the relentlessness of multiple gruesome scenes, the work lacks the overwhelming impact of Great Deeds Against the Dead, an impact that comes from the human scale of the figures.

The Chapman brothers of course, couldn’t stop there. Reworking Goya’s images of destruction wasn’t enough so they set about intervening with the actual images. Having bought a copy of the Goya portfolio and worked on top of the images, giving the figures cartoon-like clown and animal heads.

Jake and Dinos Chapman, Great Deeds Against the Dead from Insult to Injury, 2003

There’s no doubt that this is a controversial work. The prints were made after Goya’s death, though they were made directly from his plates and the set was in mint condition so of considerable significance. Prints are, of course, a reproducible medium, so the set wasn’t unique but it was, nonetheless, important. The Chapmans have described their act as ‘rectifying‘ the etchings though others have, inevitably, described it an act of vandalism.

Jake and Dinos Chapman, Sad Presentiments from Insult to Injury, 2003

This was a work that I’d read quite a bit about before seeing it for the first time. There is something shocking about the notion of destroying or defacing someone else’s work, especially when it’s of historical significance (something I’ve touched on before). I expected to hate it. I was – and am, I think – convinced by the argument that the Chapmans had vandalised Goya’s work, nonetheless I found the prints moved me precisely because of the act of ‘rectification’. Though there is an element of shock in terms of the act of making this work, the outcome, for me, is unexpectedly thought-provoking and looking for, and at, the contemporary interventions made me look much more closely at Goya’s work.

2 thoughts on “Remakes and revisions”