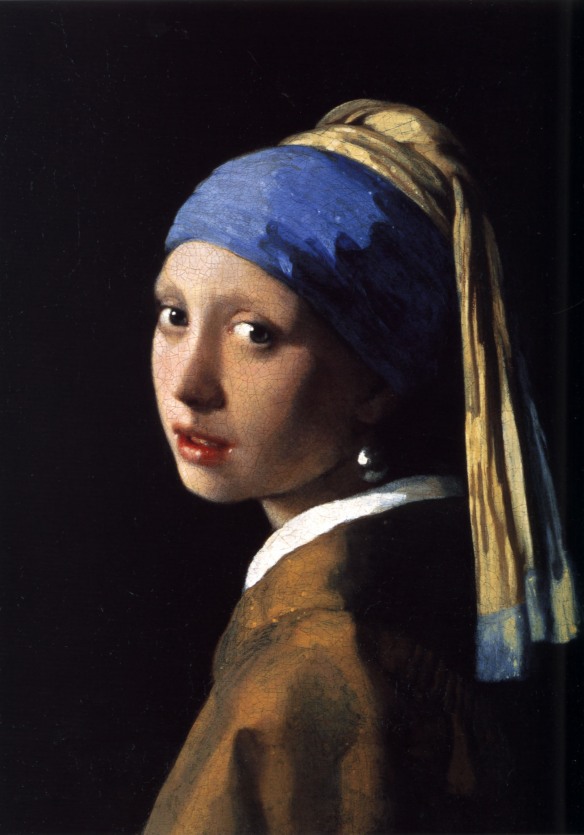 Johannes Vermeer, The Girl with a Pearl Earring, 1665

There are some images that stick in the mind. Johannes Vermeer’s The Girl with a Pearl Earring is surely one such. There is something haunting about the way the girl looks out at the viewer; it’s mostly about the eyes, but the slightly open mouth adds to the mood of the piece. The girl is caught in the moment rather than formally posing for a portrait. Though the girl is painted with beautiful detail, the painting as a whole is quite simple. The background is dark and lacking in detail, so it’s all about the girl and that earring that catches the light.

It’s perhaps unsurprising that a painting that has inspired first a novel and then a film should also have become the subject for another painting.

Gary Hume’s take on the painting is at first sight a very simplified reworking; the girls becomes an orange silhouette with her features and that earring rendered in white. Look closely though and there are signs of more detail hidden under the surface. This is an approach Hume uses often: the subject of the painting is drawn out in outline form before being painted over – generally in household gloss or enamel paint – so that the lines of the bottom layer form a slightly raised and just visible drawing.

In the case of After Vermeer the image is reversed, for what reason I’m not sure though it could be seen as comment on Vermeer’s use of the camera obscura.

In the case of After Petrus Christus – a reworking of Pertrus Christus’s Portrait of a Young Girl (c 1470)– Hume seems to have built still more information into the lower layer but the painting nonetheless ends up as simple blocks of colour. Unlike After Vermeer though, here it’s hard to tell whether the subject is looking modestly down as one might expect from a picture of the time or out at the viewer as is actually the case. 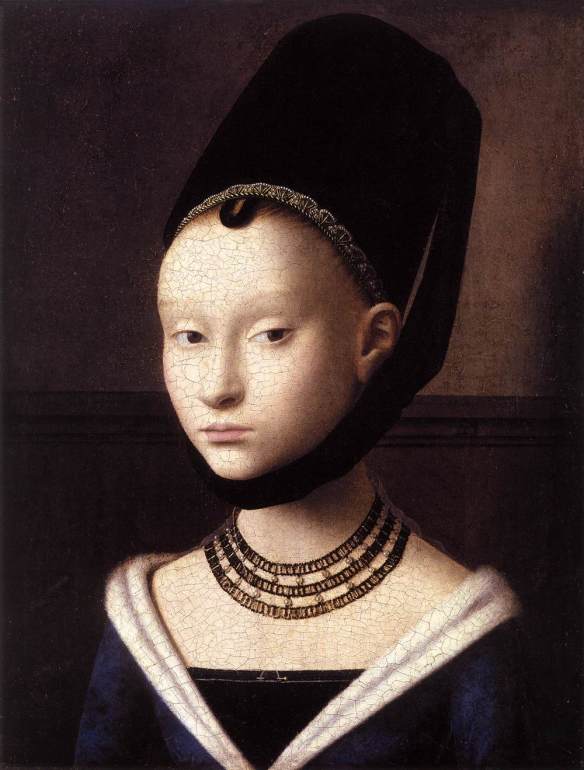 I have a somewhat ambivalent relationship with Hume’s work (his recent White Cube exhibitions, which I wrote about here at the time, left me cold). While I usually like his paintings from the late 1980s and ’90s, I’m less interested in his portraits than in the door paintings for which he was first known. I find the relationship between these paintings and the historical works from which they are taken interesting, though I’m not sure Hume has anything of note to say by making them.

2 thoughts on “Simplifying the iconic”