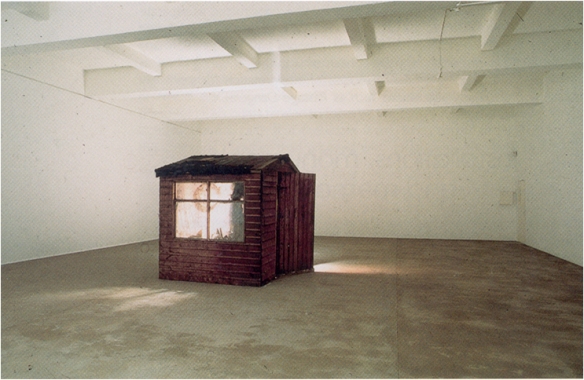 It started with a shed. It was full of all the sort of stuff that somehow gets collected in a shed over time. Sheds are useful. They are places to keep things that we want but don’t quite have space for and this one was pretty full. Cornelia Parker started by putting the shed in a gallery – Chisenhale in east London – before moving it to a field and getting the British Army to blow it up.

Parker then carefully gathered up the pieces and suspended them in the gallery around a central light bulbas though time had frozen mid-explosion. 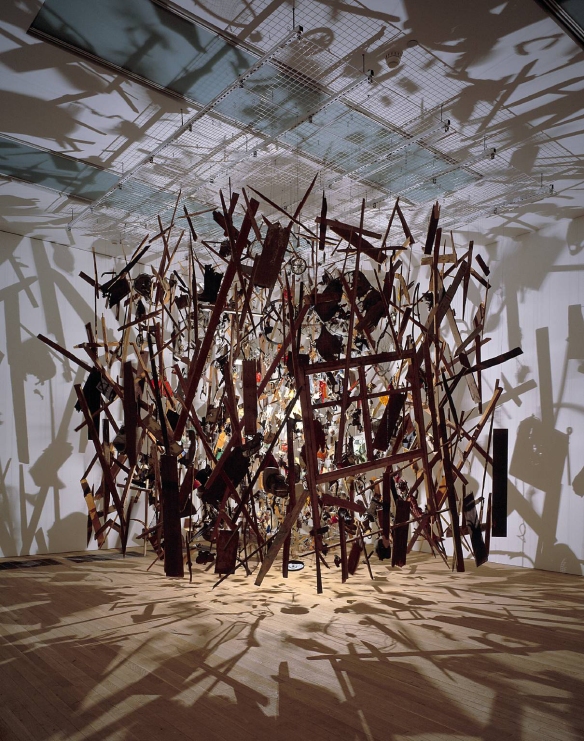 Like Kim Rugg and Lenka Clayton (in the work discussed in yesterday’s post), Parker has taken something who, broken it down into fragments according to her own system – admittedly a less precise one than those chosen by Rugg and Clayton – and carefully reassmbled the parts into a new whole.

The resulting installation is fascinating. The suspended fragments cast shadows around the space. Looking into the heart of the work it’s possible to make out some of the objects that were once the shed’s contents as well as parts of the shed but everything is mangled. The contents – old garden tools, a child’s tricycle, books, a fire bucket and assorted other household objects – were gathered from Parker’s own shed and those of her friends and supplemented with things bought at car boot sales (some of which had probably previously languished in sheds). Part of what makes the work so interesting to look at is good old-fashioned nosiness. I want to work out what was in the shed for exactly the same reasons I’ll scan the bookshelves when in a house I haven’t visited before. But it’s more than that here. There’s a universality to the collection somehow. It’s the type of stuff we all tend to accumulate given somewhere – such as a shed – to store, so the installation comes with a sense of possibility. I too could shed the contents of my shed. Well, okay, in my case not an actual shed, more of a potential spare room if only it wasn’t so cluttered. Perhaps the army could help.