For Kim Rugg, the chaos of a newspaper front page is something to be organised. I’m sure we’ve all seen publications we think could be better presented but few would go to Rugg’s lengths to create a different order out of the information on offer. Rugg painstakingly cuts up the page and reorganises the content according to her own system, so that here the letters in each section are in alphabetical order.

It’s easy to recognise the paper as the Guardian but harder to determine the news of the day and certainly impossible to make sense of it in any conventional way. 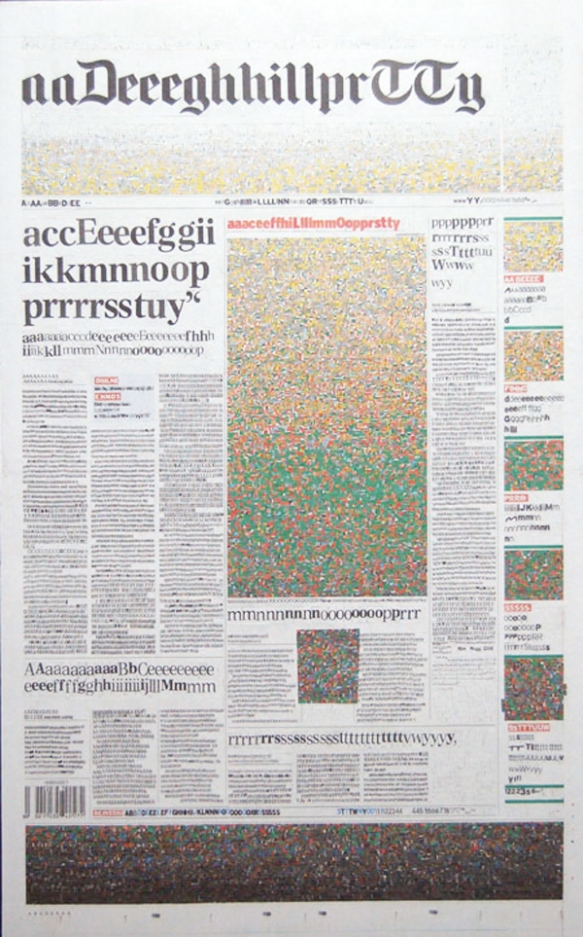 One of the interestings about this work for me is the extent to which it focuses my attention on the basis of each newspaper’s design in terms of the fonts used, page layout and use of images. The actual stories can only be guessed at, but I know at a glance which paper is which and the Guardian immediately appeals to me more than the Daily Telegraph. It’s not just about familiarity – probably entirely predictably, I am a Guardian reader – it’s that the page feels less cluttered and the fonts cleaner.

Rugg has also started to reorganise other objects, making both two dimensional works and installations but those are for another day perhaps. Today, I’m more staying with alphabetical order – it’s nice and simple after all and something that makes everything clearer – and moving on to Lenka Clayton’s extraordinary alphabetised version of George Bush’s 2002 State of the Union address.

The thing that fascinates me here is partly the way the reordering actually does make a new sense of things in that we get to understand how often Bush uses certain works but it’s also the way the words become meaningless aural pattern. The result is both funny and disturbing. What seems like endless repetition of “America, America, America…” here becomes meaningless gobbledegook from which we move – principally via American, Americans – to “an, an, an…” and “and, and, and…” both used many times making Bush seem to stutter at some length, a fate he suffers again with “be, be, be…”. Though this is often referred to as the ‘Axis of Evil’ speech, the word axis is used only once.

Both Rugg and Clayton have taken news events and the reporting of them and turned them into works that offer a new perspective even though as they are impossible to make sense of. For me the obsessiveness involved in the making of such obviously labour-intensive works is a significant part of their appeal, but more than this I enjoy the incongruousness of the arbitrary imposition of wholly inappropriate systems to existing media and am fascinated by the oddity of the resulting works, which are simultaneously alien and familiar.