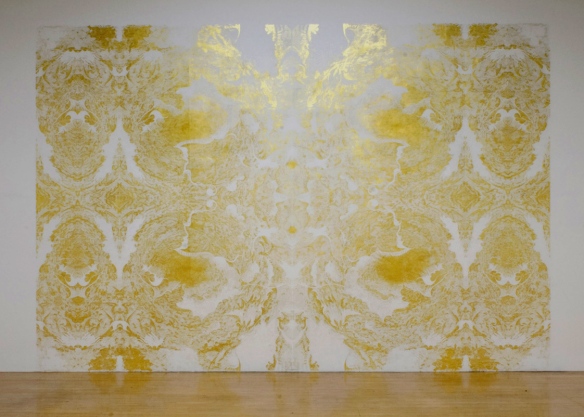 For all that I’m fascinated by Sol Lewitt’s conceptual approach, his wall drawings also bring the extraordinary beauty of Richard Wright’s wall paintings to mind and bring me back to work that can be enjoyed on a purely aesthetic basis. That’s not to say that there are no ideas in play here but faced with a work like the one Wright made for the 2009 Turner Prize exhibition my first reaction is one of wonder at both the extravagant beauty and the scale of the thing.

Though the scale of the work is extraordinary, close up it’s the intricate detail that overwhelms and it’s in the repeated moving in close to appreciate the detail and stepping away again to take in the whole that I find the “but how?” question nagging quietly away somewhere in my mind. Ultimately though, I’m less interested in how Wright made the piece than in the fact that he did and that I get to spend time with it and enjoy it while I can. Which in turn brings the realisation that this enormous undertaking will be painted out when the exhibition ends and that – unlike LeWitt’s work – it can’t be reinstalled later by getting a team of assistants to follow a set of instructions. This is a one-time only deal. 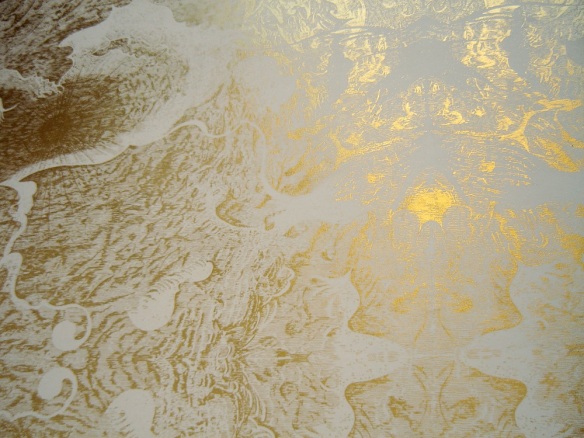 For me, one of the most powerful aspects of this work was the emptiness of the space. There’s something powerful about seeing a work across a huge otherwise empty gallery. In a way it’s about the way to lets you see the work first from a distance, uncluttered by other pieces in the space, before approaching it at your own pace without distraction. But it’s also about the cavernous nature of the space and the restraint of the artist in not seeking to fill it. 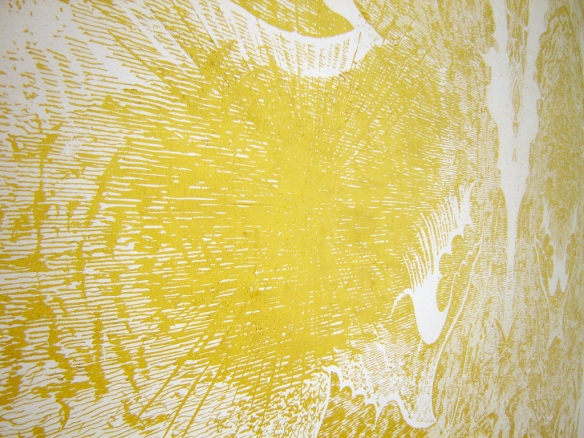 The year Martin Creed won the Turner Prize for Work No. 227 The Lights going on and off (which I mentioned briefly in another post) one of the things that struck me most was how cluttered the other artists’ exhibitions seemed. I had a similar experience seeing Richard Wright’s work in the Turner Prize show. Though I’d already put actual money on Wright despite seldom betting on anything, I went to the exhibition fully expecting to want Roger Hiorns to win (he was nominated for the extraordinary installation Seizure, which I’ve written about before and may well write about again now it’s found a home in Yorkshire) but was won round buy the seductive combination of the enormous complexity of the work and the simplicity of the empty space.

Faced with a work I really loved, I found the thought of it being painted over when the exhibition ends a difficult one to get my head round. But in the short video commissioned for the Turner Prize show Wright won me round completely by talking about his work for now: “this work is not for the future, it’s for now … I like the idea that there’ll be nothing left when I’m gone”.