A simple visual link brings me somewhat unexpectedly from William Wegman to Edward Ruscha, not artists I’ve ever really thought of as in any way connected before. Admittedly, it’s a fairly tenuous connection but it was Wegman’s Spring that brought Ruscha’s Dog back to mind. There are the obvious similarities of dogness and wispy straw like stuff and the colour palette is fairly similar. And of course, as even vaguely regular readers of this blog will be aware, I’m not one to shy away from a link purely on account of its tenuousness. Plus, importantly, I really like Ed Ruscha’s work. Not that pieces like Dog are generally the works that come to mind when I think of Ruscha (which conveniently means he’s likely to crop up in another post sometime soon). 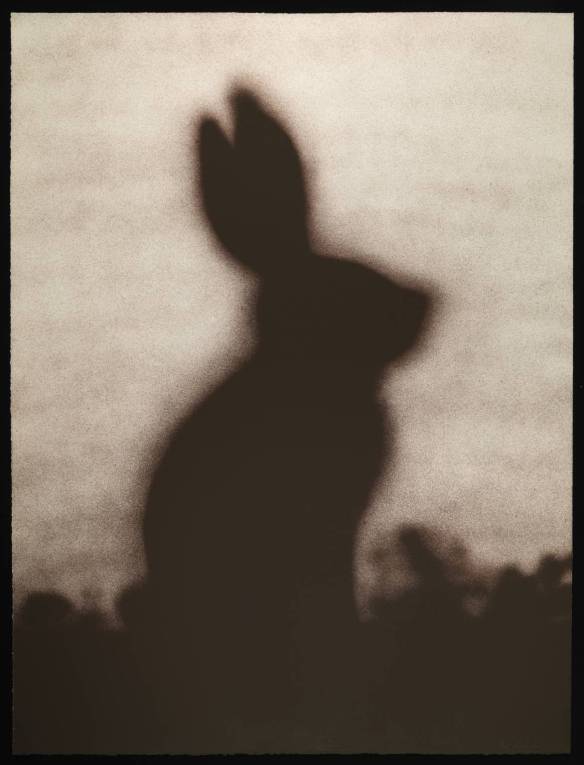 What fascinates me about Dog and Rabbit is the way the shadowy suggestion of an image is enough. Dog is clearly a dog seen through a screen of long grass. Except that it isn’t. It’s a doglike form that could be made of anything. Is there a dog somewhere casting a shadow? One assumes not. Is this the sort of shadow puppet made by with nothing more than a light source and a hand? That too seems unlikely. The reality is I have no fixed idea about how the image was made and not much interest in knowing. My enjoyment of the work comes exactly from the ambiguity and form that movement from recognition to confusion that comes from glancing at the image and then taking a proper look. 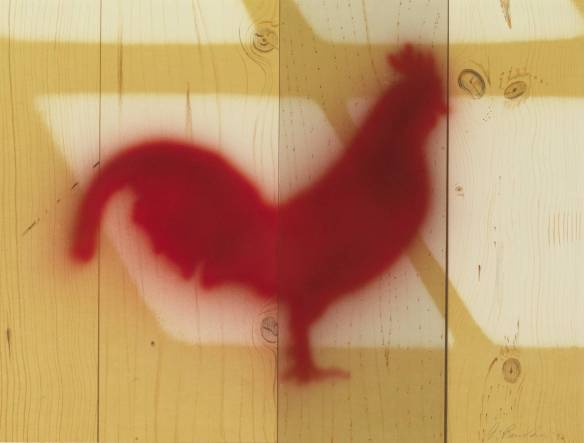 In a way, Red Rooster feels connected to Dog and Rabbit, though the print process is a different one and the use of a stencil and spray paint to make the rooster image is very clear. But here too there’s an ambiguity about the printed wood that forms the background. When I think about Ruscha it’s usually about his text works, but the simplicity of these images somehow has the right sort of optimism to bring a bit of cheer to a rainy January.