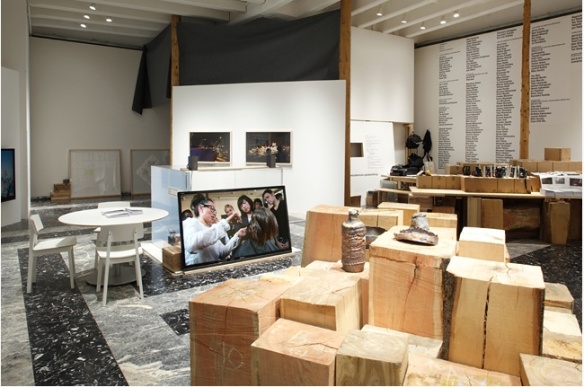 One of the frustrations of art fairs, biennales and the like is the intense time pressure of trying to see everything you want to see in a day (or contemplate buying another ticket to go back, an unappealing option even if one has an extra day free to make it possible), making video and performance works really tricky. On the plus side, the excuse to have a bit of a sit down is often welcome so it’s not all bad. Certainly at last year’s Venice Biennale some of the works I enjoyed the most were time based including a number I really wanted to go back and spend more time with given the chance (didn’t really happen in the case of the things I most wanted to revisit, unfortunately, but that’s the way it goes really). I’ll write more about some of the works that have stayed with me most clearly in the coming days, I hope, but I’ll start with a show that mixed video and objects in a space that still bore the traces of the previous year’s architecture biennale. None of which is what interests me most about the work.

Koki Tanaka, A hair cut by nine hairdressers at once (second attempt), 2010

The thing that fascinated me about Koki Tanaka’s exhibition was the pleasure of watching people trying to collaborate on tasks that really don’t lend themselves to it: making pottery, cutting hair, playing the piano. Design by committee is, of course, seldom a good thing – and in the case of Pottery produced by 5 potters at once we also get to see the outcome – but it’s the group dynamics that make the five videos such compulsive viewing (excerpts of all five videos can be seen here). That and, on a scorching hot day, the chance to lounge on a sofa in the cool of the building for a bit of a mid-day rest.

There is much to enjoy watching the interaction between the five young pianists in A piano played by five pianists at once (2012), particularly as they discuss how they will approach the piece. This is not a group of equals, some are enthusiastic, some aloof (at times to the point of sulkiness), but those who seemed most disengaged with the discussion are at times the most focused during the performance. In the end it’s hard to know what the real relationship is between the group and who sees whom as the best/worst pianists, but trying to disentangle the power relationships holds me with the work for rather more time than I can really spare. 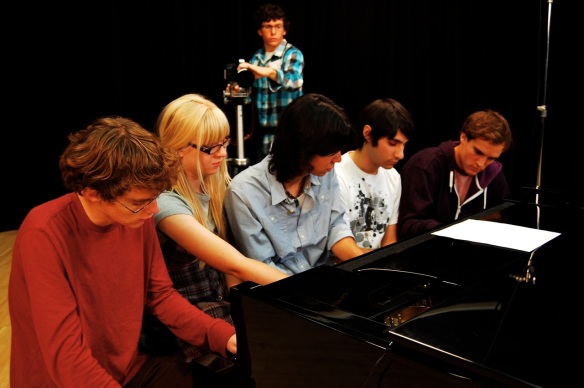