The Spotlight section of Frieze Masters offered a fascinating reminder of the art that was being made in the 1960s and ’70s and, in particular, of the women artists whose work is gradually gaining greater recognition. It’s not just women artists whose work doesn’t really become known until much later of course, but I don’t think it’d be hard to make the case that it happens disproportionately to women (one would hope that this is no longer the case, but that’s something that only time will tell). Of Birgit Jürgenssen’s work, shown by Galerie Hubert Winter, it’s a small sculpture that has stayed freshest in my mind.

Pregnancy Shoe is a strange object; there is a similarity of approach perhaps with Louise Bourgeois’ use of fabric – and thus the shared approach of using materials and processes often seen as ‘feminine’ to make feminist work that comments on women’s place in society – and with the surreal nature of the work. Though the show appears to be pregnant, it’s unclear quite what it will actually give birth to.

The work also puts me in mind of the pregnant chairs of Nina Saunders (which I’ve written about before) though the intimacy of scale and the fleshy pink of Jürgenssen’s piece is very different. In terms of colour and the oddity of the object, the work also puts me in mind somewhat of Sarah Lucas’s use of tights as a material for sculpture (though this is admittedly in part because I’ve just seen one such work at the Sadie Coles HQ stand at Frieze).

Though Jürgenssen’s Pregnancy Shoe is clearly wearable, it doesn’t look at all comfortable and the pointy toe and stiletto heel both suggest a different female role to the shoe’s pregnant belly. Arguably, the shoe explores the objectification of women and the madonna/whore dichotomy. And, on a shallower level, but then, you know, we’re talking shoes, it’s just a really beautiful object. 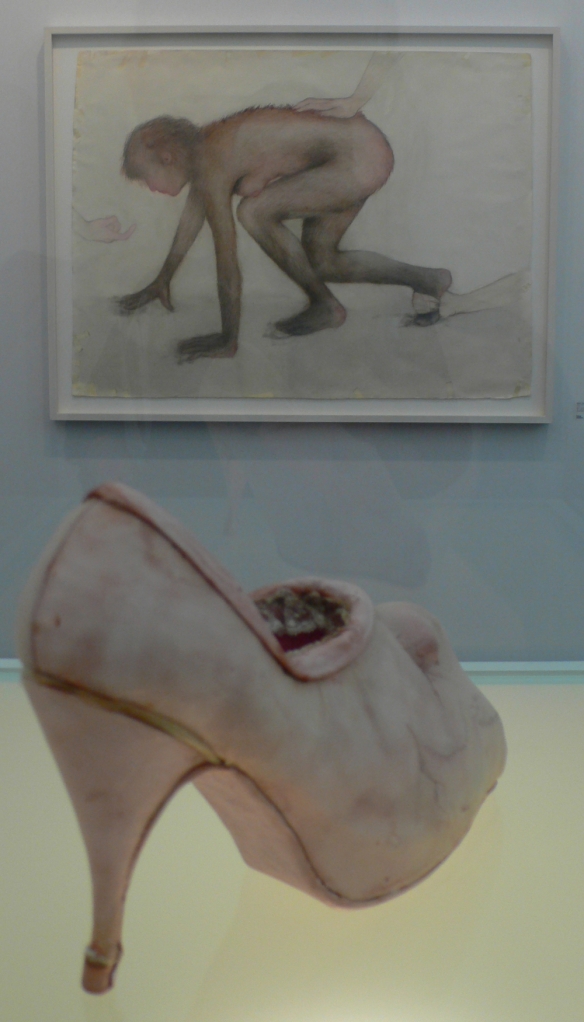 1 thought on “Bumping along”