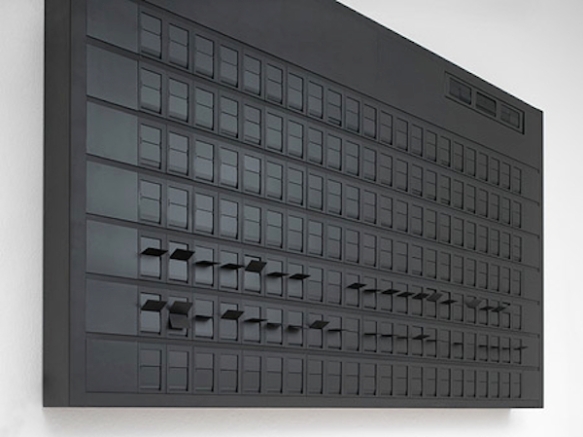 Writing about Bruce Nauman’s Days yesterday put the idea of sound and the way information is communicated firmly in my mind, so coming across a leaflet for Fade In/Fade Out – a show I saw at Bloomberg SPACE a few years ago – while sorting through a pile of random paperwork felt like a very good coincidence. There were a few great pieces in the exhibition, but the work that’s stayed with me most clearly is Kris Martin’s Mandi iii, a station information board loudly and relentlessly updating to make sure we have up to the minute information. But as the flaps clicked over the lack of information remained; every surface on the board was plain black.

I think for me the most fascinating aspect of this work was the mismatch between the apparent urgency of the communication method and the total lack of information transmitted. In a station, with a board like this in actual use, we focus on the message more than the means of communication. Here there was no information so the message became the urgency and futility of the attempt at passing on information. And, of course, given that the work is essentially a large black rectangle, in a way it also seems to reference monochromatic painting.

Bloomberg SPACE occupies the entrance and walkway around the atrium of a large office building, Bloomberg’s European headquarters. Given that Bloomberg is a media organisation providing financial data, the location gave Mandi iii an additional poignancy. Was is trying to warn us of something? Or were we missing data that would help make an important financial decision?

I also distinctly remember wondering how the poor people stuck working at the reception desk put up with the noise all day, every day, for six weeks. I suspect they were glad when that particular exhibition ended.

Bloomberg SPACE is a gallery I don’t get to often enough but one that’s always worth checking out. The current exhibition is by Turner Prize nominee Elizabeth Price and runs until 12 August.