After two consecutive posts about a body of work that – while not, in fact, devoid of laughs – is best described as thought-provoking and challenging and which raises questions about the worst aspects of twentieth century history, it seemed like time for a bit of light relief. It was thinking about seeing Yael Bartana’s work at the Venice Biennale that brought Urs Fischer to mind and though the Problem Paintings weren’t what I was initially planning to write about, they make me smile in just the right way so the work by Fischer I saw in Venice will just have to wait. 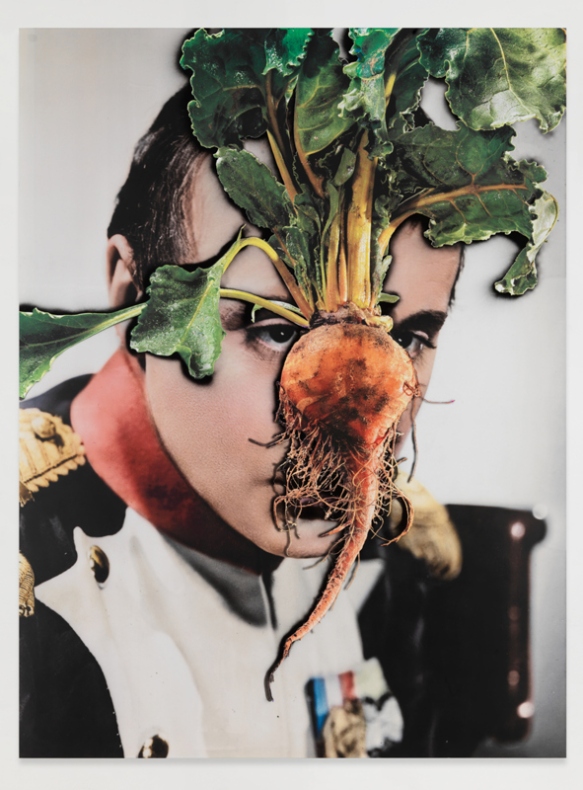 Each of the Problem Paintings takes the same basic form. The works are large-scale (3.6m x 2.7m) screen-prints on aluminium, each consisting of a publicity photograph of a Hollywood movie star obscured by an object such as a vegetable or a screw. The objects take centre-stage here, becoming the subject of the portrait. Though ultimately this is a body of work that could be seen as slight, this swapping around of what we might consider to be the natural order of things – a portrait is of a person; if the subject of a portrait shares the space with an object it is generally because that object in some way tells us more about them as a person – is interesting.

To an extent, Fischer’s juxtapositions operate in a similar way to some of John Stezaker’s collages but here there is the added element of scale and medium. These are not photographs collaged together but screen-prints made on the scale of large paintings. They are made to be seen from across the room rather than viewed up close. The effect of this is to make viewing the work a shared experience. There is also a level of defamiliarisation that comes with the shift in scale. In the end though what makes these work for me is quite simply that they are slightly bonkers and make me laugh.

Though I’ve seen other works by Fischer, I haven’t seen the Problem Paintings in real life but though I suspect that ultimately this is a body of work to be enjoyed and set aside, I would rather like to. I like the oddness of the images and I find the colours and level of detail in the objects rather beautiful. Art has the power to move us in all sorts of ways. This work isn’t profound and it won’t make me think about the state of the world for months – or even hours – to come, but it does make me laugh. And sometimes that’s all you need.

1 thought on “Portraits and problems”