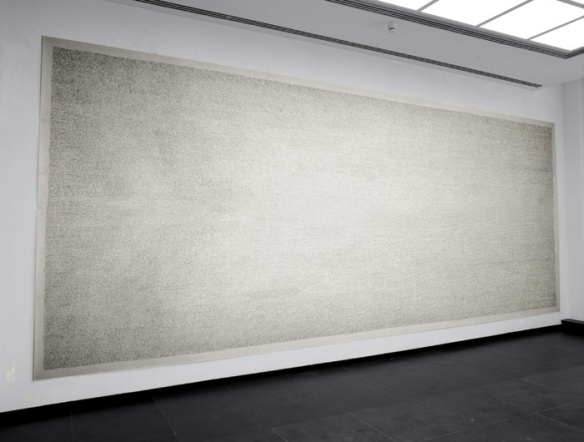 Stories can be told in many different ways, words on the page and images on a cinema screen being two of the most common. It’s when the means of story-telling becomes words on a cinema screen that things start to get confusing. I’m not sure how easy it’d be to try to follow the story of Apocalypse Now from Banner’s piece of the same name, but the narrative is all there. It’s just that it’s there as a hand-written text on a page the size and shape of a cinema screen. And only yesterday there I was claiming Sean Landers choice of line length seemed excessive! 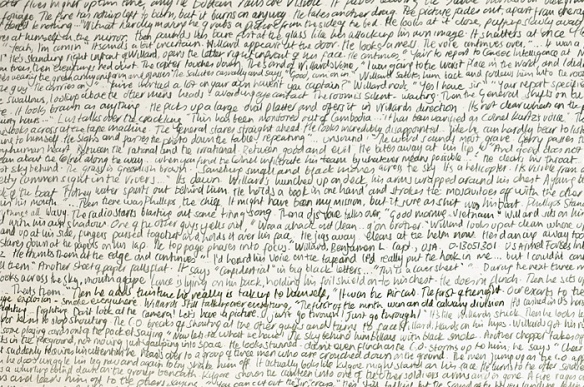 Banner describes the film carefully, going into considerable detail, but ultimately the whole film becomes a single – text-based – image. Film, though each indivitpdual fane is still, is by it’s very nature moving image though andtraditional visual artforms such as painting and drawing have always struggled with movement. Banner’s work adopts a different approach to recording the movement inherent to the movies, albeit one which is to a degree predicated on its own inadequacy. 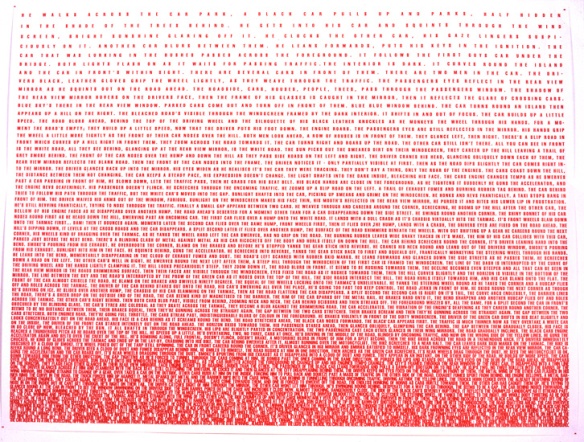 In a series of works called Car Chases, Banner addresses the lack of car chases in literature by rendering the famous cinema car chases – such as the one in Bullitt, shown here – as stencilled text. As the pressure mounts, the text gets denser with the sheet gradually moving from the white of the background to the more urgent red of the lettering. Still the form carries its own limitations. The excitement of a car chase is about speed, sound asense rising sense of anticipatiom. But we can only read so fast. Though Banner can express the excitement of the chase verbally, it’s not possible to absorb the words fast enough to match the motion depicted. 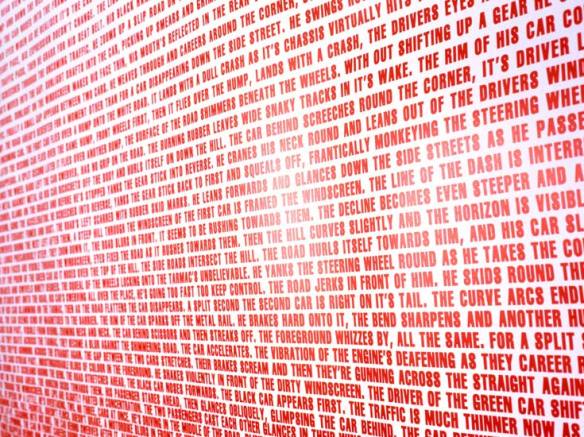 Ultimately what fascinates me about these works – and Banner’s other text-based works which I fully expect to write about sometime soon – is that they use the written word to raise questions about the way we share stories. If I want to remember the detail of Apocalypse Now I’ll watch the film on DVD but I love Banner’s work nonetheless. I can happily spend quite a long time reading one of her works, enjoying both the rhythm of the words in my head and the way the occupy the page so completely.

1 thought on “The whole story”