Rice is a staple. It’s a foodstuff a large portion of the world’s population depends on. For those of us with the luxury of choice whose diet has become mixed as a result of the movement of people, goods and traditions, it has less cultural significance but is nonetheless something we take for granted, while knowing we could survive without it. For us it could perhaps be argued that art is something akin to a staple. We could perhaps find a substitute if push came to shove but in its own way it nourishes us. Mix the two and you have Vong Phaophanit’s Neon Rice Field an extraordinary installation for which Phaophanit was nominated for the Turner Prize in 1994.

The installation takes the form of a large rectangle – or field, perhaps – of rice laid out on the gallery floor. The rice forms furrows and under each a strip of red neon light is buried. The light glows through marking out the perfectly ordered topography of the field and in a way adding to the work’s referencing of a gridded abstract painting. 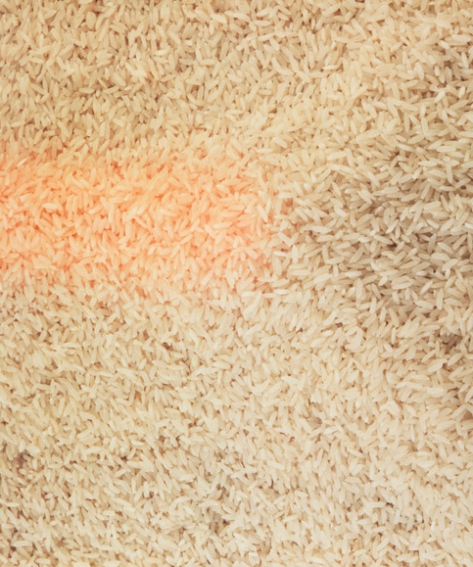 Aesthetically the work is spare and beautiful. The scent of rice is evident in the space, adding to the feeling of the work. Though Phaophanit has worked with a range of unconventional sculptural materials it is the rice employed in this work that stays in my mind. Partly of course it is the meaning the rice carries as the staple food of the artist’s country of origin – Laos – but it is also about the care with which the tiny grains of rice have been arranged – a very ordinary material displaced from its usual context (as the artist is displaced from his Laotian origins) becoming an unexpectedly painterly installation – and the absolute simplicity of the work.