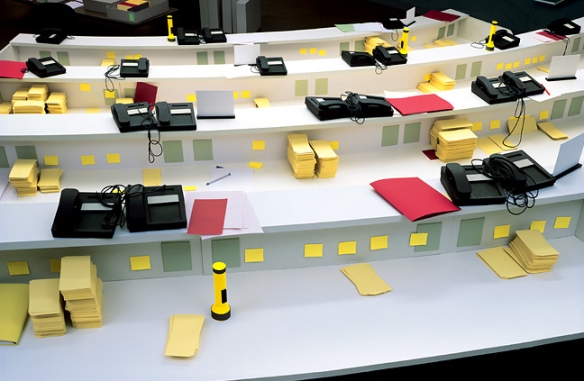 There are many ways to make a photograph. In photographic terms, Thomas Demand’s approach is very simple. The camera records the scene in as straightforward a manner as it can. But there is something odd – uncanny, perhaps – about the scene; all is not as it seems.

Demand turns his camera on scenes that seem familiar. They are often places we know about from watching the news but with a veneer if unfamiliarity; these are simplified spaces, even those with a strong emotional resonance are neutralised in some way by a certain blankness.

Poll depicts the Palm Beach County Emergency Operation Center, used for the recount of the Florida vote in the 2000 US presidential election. The curved workspaces may be familiar from photographs from the time; the piles of polling cards were certainly a key image of that election. But here everything is simpler. Though the results are large scale photographs, Demand’s practice is rooted in sculpture. He constructs models – generally on a 1:1 scale – of the places he depicts using paper and card; once the photograph is made the model is destroyed. 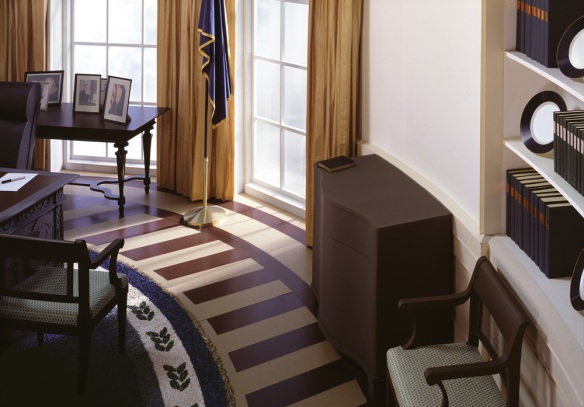 Demand usually works from existing images drawn from media sources. The flat surface of the news photograph is carefully translated into a three dimensional space before being rendered flat once again by Demand’s camera.

Taking the idea of site-specific work into new territory, Demand says of Poll: ‘In a certain sense, this work is a site-specific installation, in that the site is precisely the American short-term memory.’ Alongside this is an idea of a cross-pollination between art and reportage so that the viewer populates the scene with a narrative drawn from their own knowledge of current events or of particular moments in history. This idea of an implied narrative is widely used in contemporary art photography; it is Demand’s emphasis on the real that separates his particular unreality from the pack.