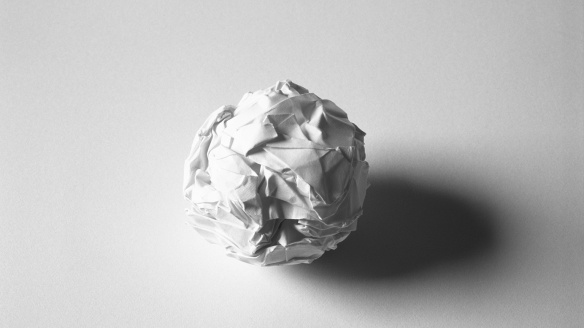 There’s something about a blank page. There’s a sense of possibility, of course: this could be where it all goes right – this page could soon be home to the perfect drawing or piece of text – but there’s also a sense of anxiety, after all what can go very right can also go very wrong. We’ve probably all been there, stuck in the cycle that sees each new page end up in the bin. You write. You read. You screw up the page and start again. If the blank page carries a sense of possibility I guess the scrunched up ball of paper carries the sense of exasperation.

In the case of Martin Creed’s Work No. 88, A sheet of A4 paper crumpled into a ball the connotation of disappointment at things not going according to plan is there to an extent but the tight roundness of the resulting ball is too close to perfect to be the result of anything other than a more careful, considered crumpling up of the page. 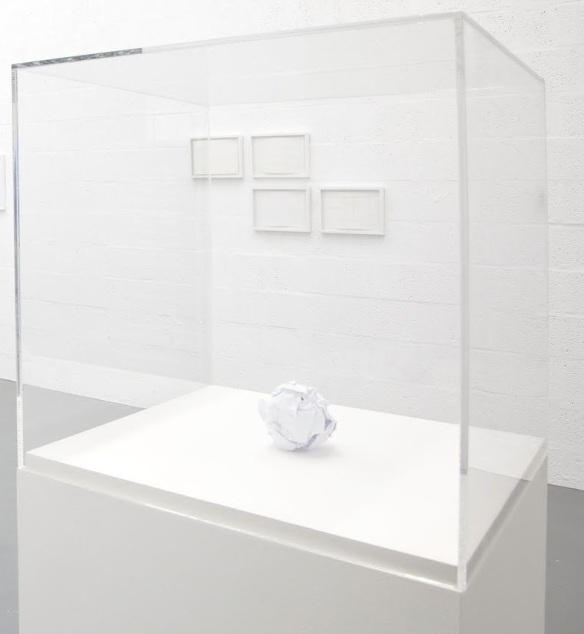 Ultimately, of course, it’s the designation of the piece as art that transforms it. In this respect it’s not just the positioning of the work in a gallery that makes it work as art; placing it in a vitrine is a way of setting it apart as something to be examined. As is the way of things with much of Creed’s work, there is a humour here. It’s impossible not to recognise Work No. 88 as something anyone could have made; in part perhaps that’s the point. This isn’t a work to be revered, it’s a work to greet with a wry smile and an enjoyment of the cheeky absurdity of the piece.

As a multiple, I rather love that the crumpled paper comes protected by, well, paper. Shredded paper, admittedly, but paper nonetheless.

Demonstrating his versatility in transforming paper, Creed has folded and unfolded an A4 page for Work No. 340, A sheet of paper folded up and unfolded. In a way this could be seen as a cynical revisiting of an earlier idea but there’s something about it that appeals to me despite this (or maybe even because of it).

I think it’s that whereas Work No. 88 brings to mind the fear of the blank page, Work No. 340 makes me think about a kind of almost unconscious fidgeting (I don’t fold paper particularly but I do fold empty crisp packets in the pub). It also brings to mind the potential of paper folding in transforming the mundane into the beautiful. In this sense, Work No. 88 is unusually rubbish origami.

1 thought on “Fear of the blank page”