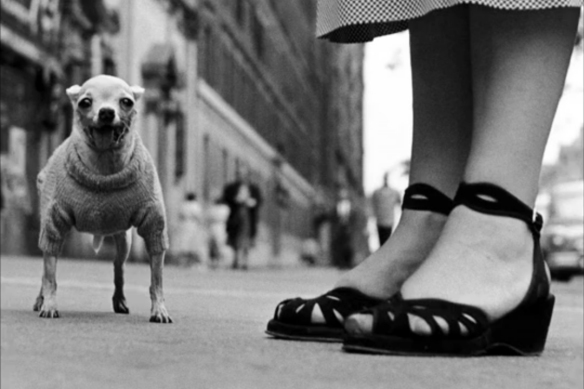 Philip-Lorca diCorcia’s The Hamptons has made me start to think about other photographs of dogs and about how they often make me smile. Even the most cursory glance about the place reveals the internet to be all about kittens, but when it comes to actual photographs in actual galleries then I think dogs win out. So in part to get me out of the rut of writing about art I saw last year, here’s some art I saw even longer ago. Admittedly as steps forward go, this may not be a very impressive one but in mitigation, there are some really great art dogs out there and what better way to cheer up this rather rainy January than by looking at pictures one can’t help but find cheering? And what better way to start than with Elliott Erwitt? 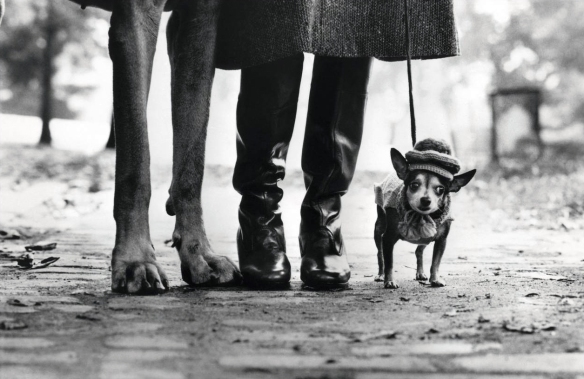 Whatever the subject matter, Erwitt clearly has an eye for a picture but it’s the perfect comedy of the dog pictures that always comes to mind when I think about his work. There’s often something slightly comical about small dogs – to me, anyway – but through Erwitt’s lens they become both funnier and engagingly more absurd. Even wearing little knitted sweaters, these dogs are charming but not cutesy. There’s an eccentricity about them that makes me want to see their owners, though the power of the pictures is that Erwitt keeps us guessing.

Though Erwitt has made many such pictures, this seems to be subject matter he keeps returning to rather than a deliberate series. Though they have a lot in common, the pictures here are decades apart. They talk not just of the animals and their never fully visible owners but also of the times and places in which they were made. In a way I guess Erwitt offers a history of sorts through the study of pets and their owners in public places. There is a humanness to the animals that is heightened by the fact that their owners are half hidden. Clever framing and the smallness of the dogs means the world often looks like a strangely distorted place in these pictures; the often quizzical looks on the dogs’ faces suggests that they too are baffled by the giants who walk them. There is something utterly mundane about the activity of walking the dog; in Erwitt’s pictures it becomes a preposterous meeting of man and beast. 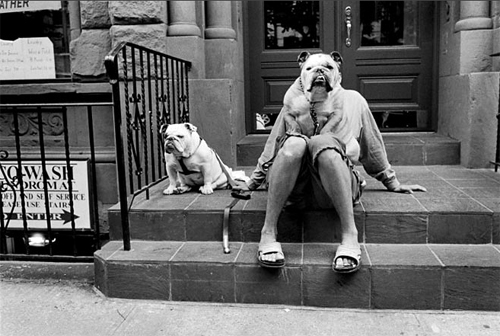