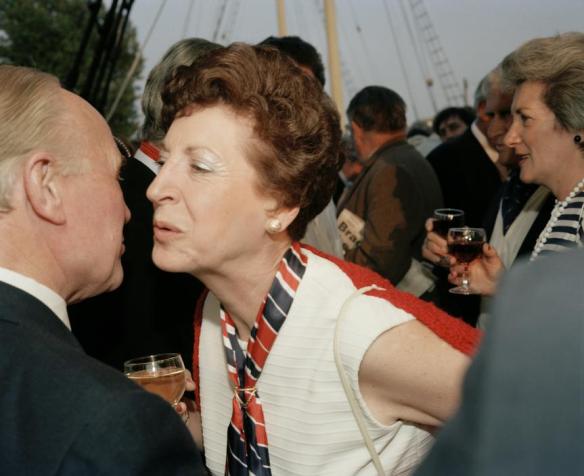 Martin Parr, Election party aboard the SS Great Britain from The Cost of Living, 1986-9

The Britain of the 1980s wasn’t all about strikes and unemployment of course. There was another side to the story: just as there were the have-nots, so there were the haves. For some, Thatcher’s Britain was a comfortable place. The rich were, after all, getting richer. And with that, for those who belonged, came the social whirl of an entitled class at play. In fairness, it doesn’t look like much fun.

In The Cost of Living, Martin Parr captured the comfortable lives of the well-heeled revealing the degree to which one section of the population was cushioned from the day to day reality of life for the rest and the often grotesque of culture of wealth and upward mobility.

Just as I wouldn’t want to wait for hours on end week in, week out in the dole offices documented in Paul Graham’s Beyond Caring, I’d hate to spend time at most of the events Parr recorded.

It’s not just that the pictures are now period pieces – a reminder of a different time – it’s that neither the people nor the places look like much fun. There is a grim determination to, well to what? To network maybe? To keep up appearances? To support the cause? To pass as belonging? Though many of the pictures are of parties, there seems to be more evidence of anxiety than of enjoyment.

The Young Conservatives look conservative, certainly; but only some of them look young. And if this is a ball, then I’ll take a pint in the pub any day. In part of course it’s that this is somewhat alien territory. My background and life experience maybe firmly middle class but I’m pretty sure I couldn’t have blended in and passed for ‘one of us’ at any of these events. In the main though the grotesqueness is down to Parr’s picture-making. The camera angles, use of colour and Parr’s trademark use of fill flash all conspire to build a gloss of unpleasantness. The upwardly mobile, frozen in the moment