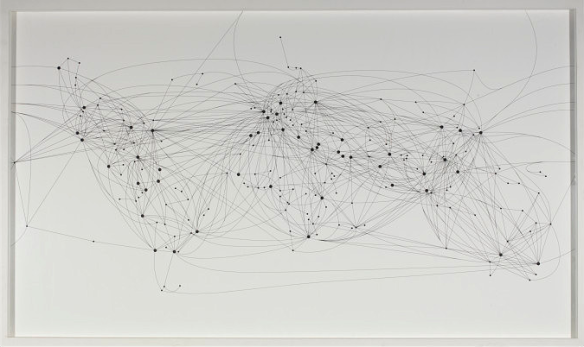 Air travel baffles me a bit. I sort of get the physics of the thing (not really, that baffles me too, but I get that it works) and rationally I know that everything’s really tightly controlled and monitored but looking up at the vapour trails on a clear day or watching planes coming in to land at Heathrow what I really don’t get is how the planes avoid each other so consistently. In a way, I suppose the sky is bigger than it looks but even so… The vapour trails don’t lie: that’s some complex dance going on above us.

In the hands of Langlands and Bell, air routes become a map of the world that effectively talks of global communication rather than geography. Mapping the world – or a section of it – according to where planes fly shows which cities are of global importance but with a few oddities in the mix in the form of hub airports which countless people pass through en route to somewhere else. 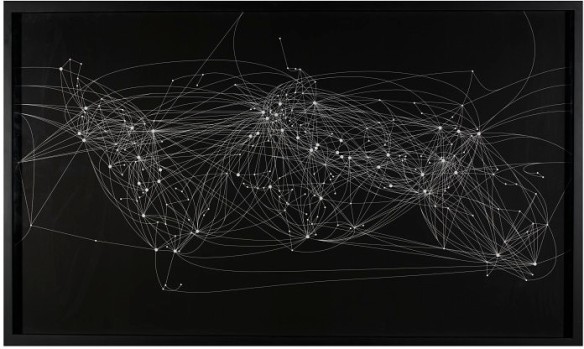 Turning information about air routes into prints, Langlands and Bell have produced prints that are visibly map-like on which the continents are broadly recognisable even if it feels like there’s not quite enough to go on. Though the prints are quite minimal – white lines on a black ground for Air Routes of the World (Night) and the inverse of this for its daytime partner – there’s an intensity to them that reflects our need for travel, essentially a need to communicate, be it for reasons of trade, information exchange or leisure. 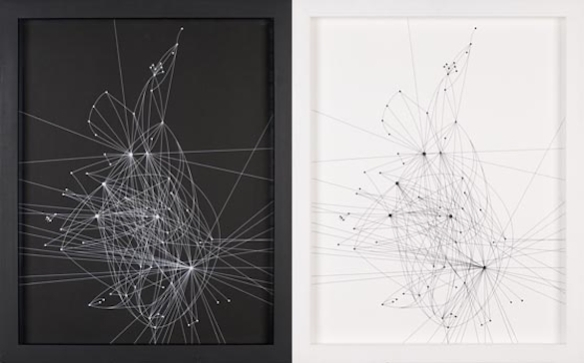 For me one of the attractions of these prints is the combination of simplicity of representation and complexity of information. That they seem in some ways almost random, like the automatic drawings of André Breton perhaps. There’s also, predictably enough, the appeal of the whiteness of the day versions. 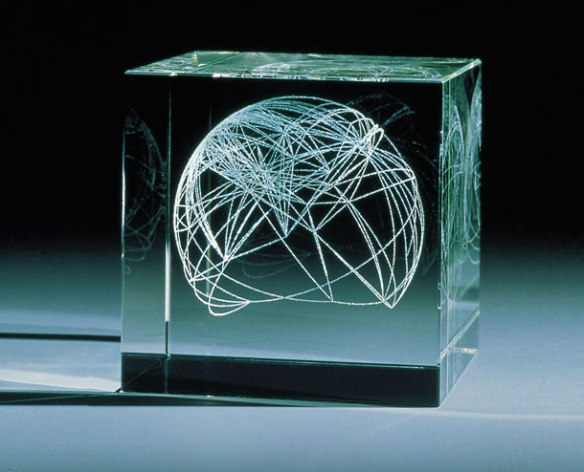 In WWW the data is rendered in three dimensions, with the airline routes etched into a cube of glass. The etched lines are reminiscent of a ball of elastic bands giving the work both a precise, diagrammatic feel and a sense of random chaos. There’s something about the way Langlands and Bell translate data into visual forms that are simultaneously minimal and functional – or perhaps simple and frenetic – that appeals to both the artist and the scientist sides of me.