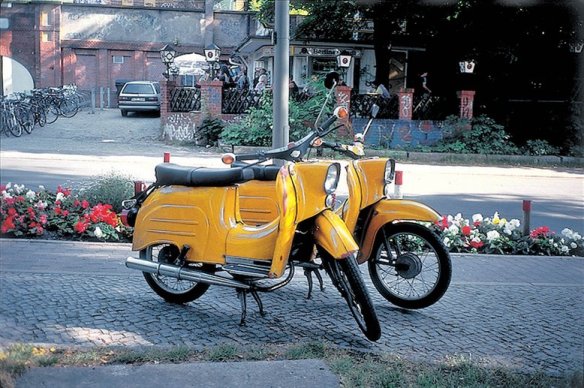 Gabriel Orozco, Until You Find Another Yellow Schwalbe, 1995

While I’m in on a bit of a ‘means of transport as art’ theme I really can’t ignore Gabriel Orozco’s Until You Find Another Yellow Schwalbe. Living in Berlin while on a DAAD residency in 1995, Orozco got around the city using a yellow Schwalbe scooter. These scooters, made in the former East Germany, were cheap and quite a common sight on the streets of Berlin. Whenever he saw a scooter like his parked, Orozco would pull up next to it and photograph the pair of scooters. He left a note on each of the scooters inviting the owner to bring it to a gathering outside the Neue Nationalgalerie on the anniversary of the reunification of Germany.

I love the simplicity of this series. Altogether there are forty photographs, printed so that they all face the same direction as the viewer makes a journey past them in the gallery space. The repetition – which has the potential to become tedious – is somehow compelling and I always find myself completely charmed by this work. I think my response is a combination of the sunshine yellow colour of the scooters and the sense of optimism that somehow comes from seeing them in pairs. Also, given that there are so many pictures in the series, there is an obsessiveness about the work which I something I am generally won over by in art.

Orozco is an artist with a particularly diverse practice in terms of both the media he employs and the ideas he explores but it’s rare for me to see a work by him I don’t like. What unites a lot of his work is the sense of humour that so often shines through; these are works that unfailingly lighten my mood. (This isn’t the case for all of Orozco’s work; indeed he has also made incredibly moving and serious works, but that would be for another day and another post.)

Until you see another yellow Schwalbe is an example of a photographic project that is really all about the idea. Orozco has carefully considered how best to show the pictures but it’s the work as a series that matters rather than the individual images within it.

And what of those notes? Well the final image in the series answers that question. Orozco waited at the appointed place and time ready to photograph his scooters with its scooter friends. As it turned out, only two owners turned up so that last picture is of just three Schwalbes. 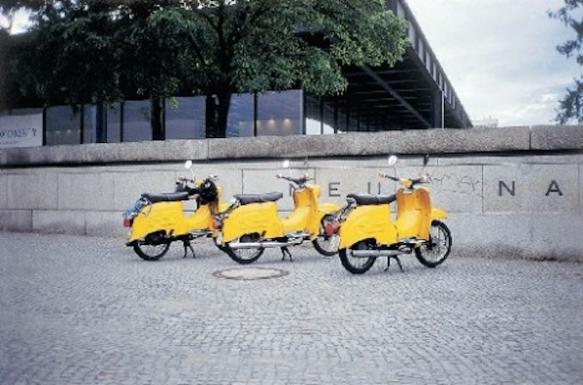 While the apparent failure of this aspect of the undertaking could be seen as a mood dampening end to the series, there’s something about the futility of it that appeals. Suddenly Orozco’s obsessiveness in making the work is thrown into sharp relief against the disinterest of his fellow scooter owners. If the work can be seen as a flawed attempt at feeling companionship of sorts in an unfamiliar city, that final image might show that life doesn’t work like that but somehow the optimism of the undertaking isn’t lost. And, I suppose, at least there are three. A single scooter, now that would be depressing.