There’s often something strangely frustrating about the Deutsche Börse Photography Prize and in some ways this year’s exhibition is no exception. Photography has been a dominant medium in art practice for a long time now but a prize of this nature has to balance art against documentary practices often resulting in a strangely unsatisfying exhibition. In this year’s exhibition, one body of work stands out in terms of he artist’s use of photography in his practice. Unusually for a Deutsche Börse nominee, John Stezaker (whose work I’ve briefly referred to before) uses rather than makes photographs, producing collages from found images gathered over several decades. 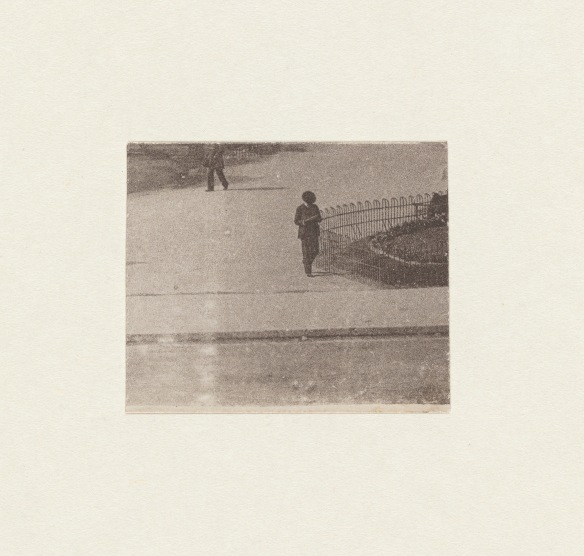 The work by John Stezaker in the exhibition includes images from several different series including the image fragments from the Third Person Archive for which Stezaker selects a small area from a bigger image and presents it out of its original context. This is the simplest possible form of collage – if indeed it can still be called collage at all – the fragment is placed within a blank space that draws attention to what we are not seeing even as it entices us to focus on what might otherwise have been an insignificant background detail. The selection made in the two images here is of a person reading as they walk along. These are quiet, inconsequential moments from everyday life that somehow become something more as a result of Stezaker’s intervention.

The nature of photography is such that since its invention is has probably always been possible to describe it as more accessible that ever before but we’ve now reached a stage where many, maybe most of us have a camera in our pocket at all times in the form of a mobile phone with the possibility for sharing pictures instantly online. That it’s against this backdrop that John Stezaker’s approach to reworking found images has finally achieved the wider recognition it’s so long deserved is oddly appropriate. It’s time we stopped to think about photography rather than continually making more pictures we never properly look at. Stezaker’s image fragments are about looking. They are about seeing not just the apparent subject of an image but also the potentially overlooked details.

And in terms of the Deutsche Börse Photography Prize, the short-listing of an artist who doesn’t take pictures is perhaps an indication that this single medium prize does have a real relevance in the debate about the nature of photography. John Stezaker taught fine art at the Royal College of Art for a long time so like half* of London’s artists I’m a former student of his. That said, I don’t think I’m biased in finding it particularly pleasing that he’s been awarded the Deutsche Börse prize.

* Not an exact figure or even a credible estimate, but there are a lot of us out there.