Francis Alÿs, Paradox of Praxis I (Sometimes Making Something Leads to Nothing), 1997

It’s the idea of making art by making a journey that’s brought Francis Alÿs to mind now. Alÿs is an artist whose work I find fascinating. It can be funny, moving, thought-provoking and, in a couple of cases, really quite alarming. And quite a few of his video works are all about the journey. I’m pretty sure I’ll write about other works by Alÿs at some point but the idea of the dismantling and remaking of the shed in Simon Starling’s Shedboatshed (Mobile Architecture no. 2) in my mind, has made me think about Alÿs turning something into nothing by making a journey.

In fairness, a block of ice in Mexico City stood a proverbial snowball’s chance in hell really, but Alÿs has made facilitating the act of disappearing the ice into a pleasingly futile act through the application of hard work in the hot sun. 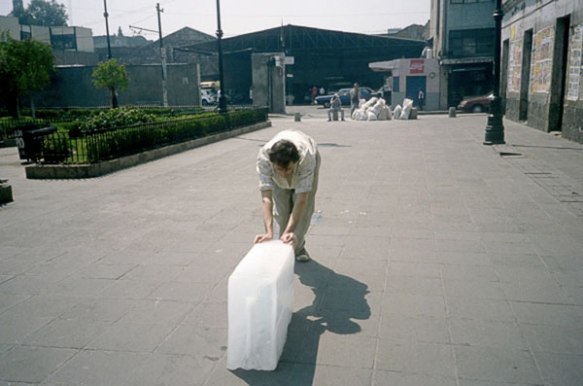 Having a block of ice delivered in the morning is hardly unusual in Mexico City, Alÿs’s home for several decades, but spending the rest of the day pushing it through the streets so that it melts from the heat of the sun and the friction of its contact with hot street surely is. And through this process of pushing the ice became nothing.

As the day wears on, the task gets visibly easier but no less futile. And at the end of the day, Alÿs is left with nothing to show for his labours except, crucially – as it’s this that separates his efforts from perhaps many others who trade their labour for a pittance and for whose lot Alÿs’s actions could perhaps be seen as a metaphor – a piece of video art.

The work gives us, well me anyway, and I’m sure quite a lot of Alÿs’s audience, an unfamiliar view of an unfamiliar place. Seeing Paradox of Praxis I (Sometimes Making Something Leads to Nothing) in an art gallery in, say, London or New York is a strange experience. Even those who have visited Mexico City – and I haven’t – are likely to see a different version of the city; indeed even those who live there will be taking a new viewpoint here. For one thing, it’s hard not to focus on the ice, on the journey it takes and the trace it leaves, albeit briefly. We see the light change as the day wears on and the block diminishes. We also see how little attention people play to the Alÿs as he passes – though a small group of children gather to watch the final demise of the ice pebble at the end and of course the work is edited down from many hours to a few minutes. Knowing that I would be likely to stand and stare, I’m intrigued by this aspect; perhaps it suggests that this is a place where people are careful not to be seen to watch others. 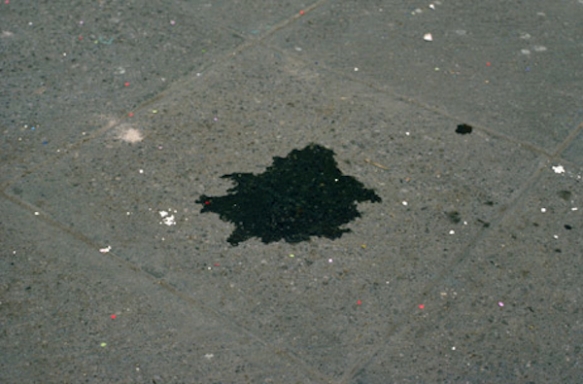 The rapidly drying trace of the last fragment of ice, a short-lived residue of a hard day which will quickly dry to nothing, is perhaps poignant reminder that labour is not necessarily productive for those who endure it.