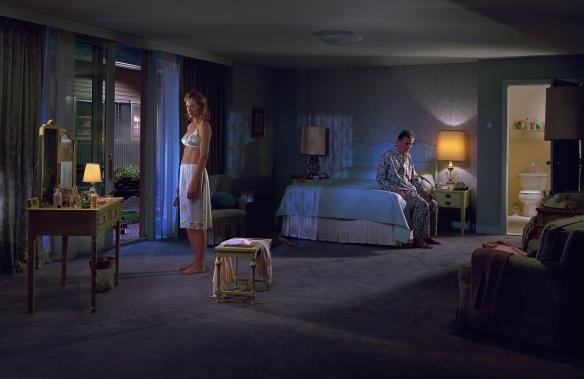 Gregory Crewdson, Untitled (Woman at Vanity), 2004 (from the series Beneath the Roses)

Although Gregory Crewdson’s strongest influences seem to come from Hollywood cinema, and his works are easy to read as film stills, in some of his pictures there are also clear art historical references. Untitled (Woman at Vanity) could easily be a still from a film or and American television series. I find myself wondering about the open curtains – especially given that this is a ground floor bedroom – and worrying about the slightly open patio door. The couple seem sad, but this is not a shared state; each looks lost in their own thoughts and their own private disappointment. The setting and the relationship between the couple might scream Crewdson but coupled with a hint of Edward Hopper. 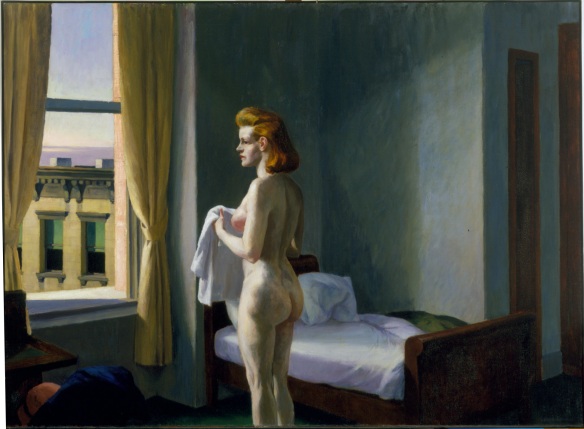 Crewdson’s reference isn’t a precise one; unlike some, his work seems to borrow an atmosphere from Hopper’s work – in much the same way as it does from film – rather than referencing particular paintings in a very direct way. And Hopper is an interesting reference point in this context as, like Crewdson, he was influenced by cinema but he was and remains an influence on Hollywood filmmakers. One of the most direct examples of Hopper’s painting being appropriated by Hollywood – long before post-modernism saw artists adopt appropriation as a strategy – is The House by the Railroad an image that feels immediately familiar.

Edward Hopper, The House by the Railroad, 1925

Though Hopper’s house isn’t inherently scary, there is a blankness to the windows which can easily be seen as forbidding; the shadows are long on the walls and the building is isolated. The house has a lot to recommend it in terms of size and the style of the architecture. Nonetheless there’s a nagging unease that comes not from concern that  its position right next to the railroad leaves something to be desired by from the feeling that this is a house we’ve seen before. Which of course we have. In Alfred Hitchcock’s 1960 film Psycho.

1 thought on “Suburban stories: the borrowers”