A more recent approach to photographing strangers without permission – albeit a rather less surreptitious one – is that taken by Philip-Lorca diCorcia for his series Heads. This series was made in Times Square, one of the busiest places in New York City and a place where bright lights and tourist cameras go with the territory. DiCorcia rigged up lights, using portable flash synced to his camera which was focused on the area he was lighting, and stood twenty feet  or so away with a telephoto lens on his camera. When someone he wanted to photograph came into his zone of light and focus he pressed the shutter and recorded the head of his subject. Simple.

Like Walker Evans’s Subway Portraits, Heads tells us about New Yorkers going about their day to day lives, with possibly a few tourists passing through Time Square in the mix. It is of course a series of portraits of the people diCorcia photographed but collectively it’s also in some way a portrait of the city they inhabit, whether they’re residents or just passing through. And in a way it also says something about diCorcia himself: the artist treated the project as ‘a day job’, setting up his camera each day and spending several hours waiting for the everything to come together. For a series of seventeen pictures (well, that’s the number he gives in the video about the series on the Tate website, but yes, some are numbered in the twenties and no, I have no idea what that’s about), he took around 3,000 pictures. 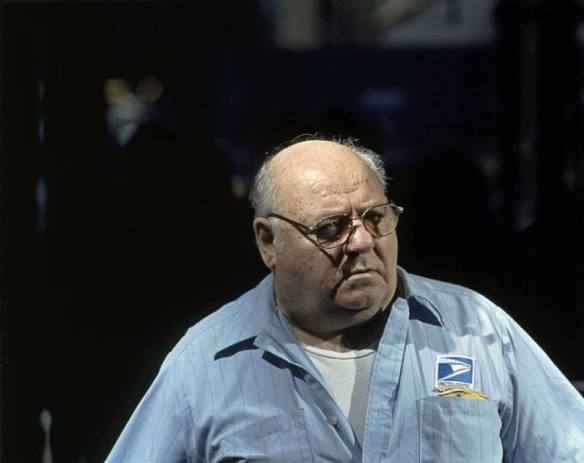 DiCorcia talks about the idea of serendipity – the happy accident of chance – which is an appealing way to make art, albeit one that has the potential to result in disappointment at least as often as not. I am intrigued by the element of chance here and by the way diCorcia deliberately didn’t speak to any of the subjects of the pictures even after the event; this decision to know nothing about them (and not to seek permission to use the image) is part of what makes the series work for me. We know nothing of these people and all diCorcia can tell us through his work is how they appeared in that particular place at that particular time.

The thing that separates this work from most street photography is that, though made without the knowledge and permission of the subjects, diCorcia didn’t seek to hide his camera or photograph surreptitiously. The work lacks the element of confrontation that can characterise street photography and yet the subjects are perfectly lit; the focus is pin sharp and the detail extraordinary. This has the effect of concentrating our attention on the subject, caught unawares and lost in their own thoughts as oct of us are walking along the street. The subjects are utterly unique but in some strange way we recognise ourselves in them.

So what of the issue of permission and of privacy? Whose side wins out when interests clash? Well, though in Britain I suspect things would probably work out rather differently, especially in the current climate which seems somewhat anti-photography in public places, in New York ultimately the right to freedom of expression won out. On of diCorcia’s unwitting models saw the his photograph and contested diCorcia’s right to use it on the grounds of both trade – the work was for sale – and advertising – its publication in a catalogue – and, after a number of appeals, diCorcia won.

The case is interesting in part because the tradition of street photography in America is such a long and distinguished one but also because the case rested on diCorcia’s work being art. There are privacy laws in New York that prohibit the use of someone’s image for trade or advertising without their permission but these don’t apply in the case of art, so it was this case that diCorcia needed to put. The case was complicated by the issue of the religious beliefs of the subject, a Hassidic Jew, but ultimately the ruling went in favour of diCorcia’s right to artistic expression, something which was seen as protected by the First Amendment of the Constitution. Fairly obviously, The New York Times explains the whole thing better than I can.

1 thought on “Seeking serendipity as a day job”