There was a time when SoHo in New York City was full of artists. Space was cheap and artists like Donald Judd bought whole buildings to live and work in; the area was full of studios and galleries. Gradually both have dispersed. The galleries have moved north to Chelsea and to find artists’ studios in any real density it’s probably necessary to head to Williamsburgh in Brooklyn. If you look closely, there are still traces of the old SoHo among the designer stores, hotels, bars and restaurants though. Judd’s home and studio is still there at 101 Spring Street, now owned by the Judd Foundation, and will be open to the public once the building restoration is complete. Artists Space has moved several times in its forty year history but remains in SoHo, on Greene Street.

Also tucked away in SoHo are two long-term installations made by Walter De Maria in the 1970s, maintained by the Dia Foundation and still housed in their original locations. Both define the spaces they’re housed in, both fit with some of the themes of American sculpture of the late mid-twentieth century such as the use of non-traditional materials and processes and a minimal approach that is rooted in geometries and measurement. 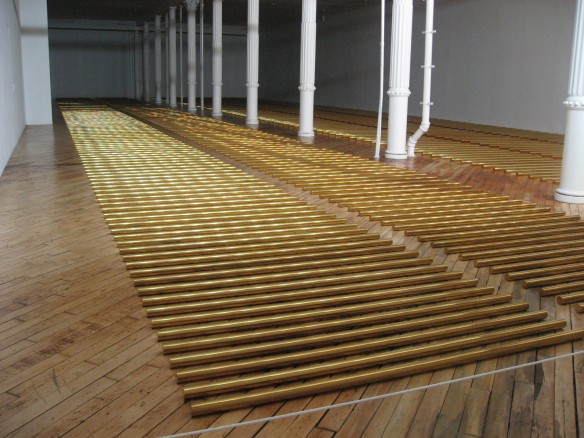 The Broken Kilometer consists of 500 brass rods each 2m in length and 5cm in diameter, so that end to end they would stretch for a kilometre. The installation is viewed from on end of the space and the spacing between the rows increases by 5mm from 80mm at the front of the space to 580mm at the back, tricking the eye which reads this as an even spacing throughout but with increasingly thin rods. De Maria has played visual tricks like this in other works too, including the The Equal Area Series (1976-77), which distorts the perspective of the space it’s seen in.

The second long-term installation by De Maria in SoHo is The New York Earth Room, a large room space at 141 Wooster which is contains 250 cubic yards of earth. That is to say, the earth is nearly two foot deep across the 3,600 square feet of floor space. That’s a lot of earth. In fact it’s 280,000 lbs of earth. There are lots of weights and measures to be listed for The New York Earth Room, but for me – though I really like the ready availability of the figures – in the end it’s all about how the room looks and the earthy smell of the place.

I’d say that for me no visit to New York is complete without calling in to see these works, but I realise I haven’t actually done so on my last two or three visits. They’ll be right there on my itinerary next trip though, whenever that might be…

The Broken Kilometer is located at 393 West Broadway. The New York Earth Room is located at 141 Wooster Street. Both are maintained by the Dia Art Foundation.