Ron Mueck, who started his working life making models for children’s television before turning his attention and transferring his skills to art, makes the world look strange and often grotesque. His hyper-real figures vary dramatically in scale, from vastly larger than life to positively diminutive; the one thing they never are is life-size. His exhibition at Hauser and Wirth – Mueck’s first solo show in London in over a decade according to the press release – contains just four works but managed to give me quite a lot to think about nonetheless.

Drift occupies on wall of an otherwise empty gallery. A man floats on a lilo on a sea of turquoise. Well, I say he floats. It’s hard to see it any other way but the sea of turquoise is the wall so the floating is imagined given that the man and his lilo are vertical. He seems bathed in sunlight; his hands hang over the sides of the airbed, as though trailing water. He looks relaxed though his eyes are invisible behind his sun glasses and his face is slightly stern. 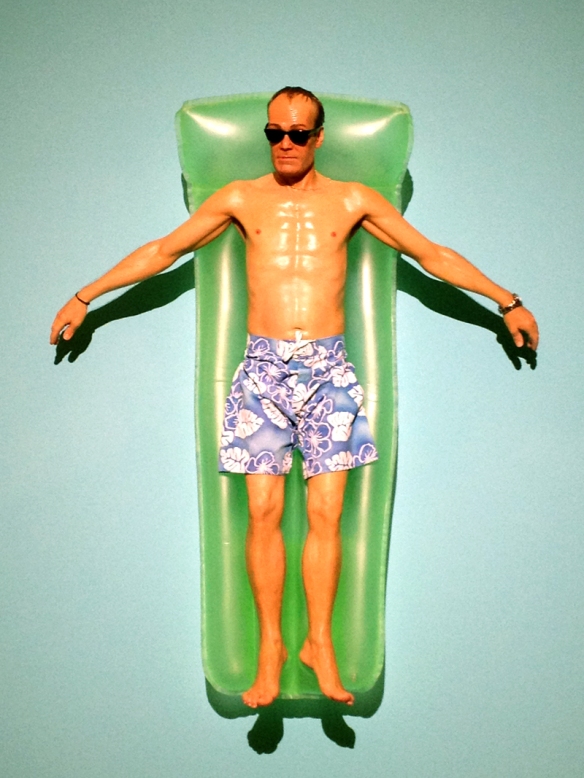 Looking up at the figure, despite the brightness of the colours and the obvious connotations of a holiday scene, I couldn’t help but also read this as a crucifixion.

In the next space, life and death co-exist in the form of two sculptures that both fascinate and disturb.

The woman in Woman with sticks is struggling under the weight of the unwieldy bundle she is carrying. There is a sense of struggle, not surprising given that the sticks are taller than her. She is sturdy and seems full of life despite being frozen in an indeterminate moment in time. There’s something quite comic about the miniature nude and her life-size burden but she’s also fascinating. Above all I think what fascinates me most is that she makes eye contact; well, that and her hair. 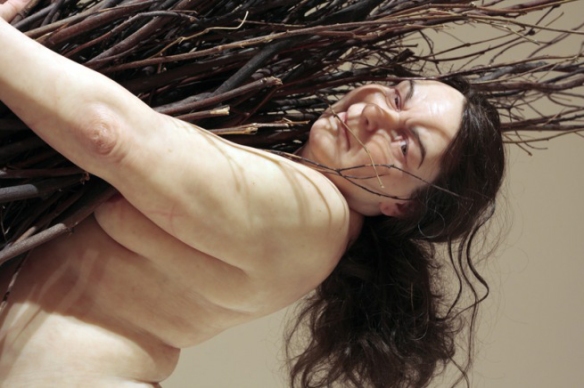 Sharing the space with the woman is the only larger than life figure in the exhibition. Still Life – suspended from the ceiling by its ankles – is a dead chicken. Here the fascination is in the texture of the chicken skin, the detail of the wound and the odd bits of feather that have evaded the plucking process. And its feet.

I think Still Life is the work I enjoy the most. It’s also the one I find most disturbing. Though clearly a chicken, there’s something about this suspended body that seems somehow human. It’s partly the similarity in tone between its flesh and that ofWoman withsticks but it also has to do with the crossing of its legs; though necessary to bind its ankles and hang the bird, this still somehow looks almost nonchalant.

In a small room, slightly tucked away behind the reception desk so that I almost missed it, there’s one final work. Small and somehow very quiet, Youth raises his T-shirt to inspect a stab wound in his chest. There’s something very touching about his apparent lack of concern despite the obvious seriousness of the wound. Whereas the other works amused and fascinated me and even, in  the case of Still Life, disgusted me a bit, Youth is quietly moving, adding an unexpected moment of seriousness to the exhibition.

I’ve always found Mueck’s work compelling and funny and by turns fascinating and hard to look at. The exhibition at Hauser and Wirth may be small but in a way it’s perfectly formed.

Ron Mueck is at Hauser and Wirth Savile Row, South Gallery, until 26 May 2012.