Staying with portraiture but today with a little more information that simply what the subject looks like, Rineke Dijksta’s Beach Portraits take a typological approach that suggests she  shares some influences with Thomas Ruff. Despite a consistency of approach, Dijkstra doesn’t seek to achieve the same level of neutrality at Thomas Ruff does with the Posrtraits series. Apart from the images I’m concentrating on here, the series includes pictures of boys and of groups of adolescents but in the interests of not ramblong on too much I’m limiting myself to looking at three of the pictures of girls.

Dijkstra’s Beach Portraits series is of adolescents standing facing the camera with the sea behind them. Despite the simplicity of this approach, each has a slightly different stance which suggests very different levels of confidence. The girl photographed in Kolobrzeg, Poland, July 26 1992 has a relaxed stance and her gaze seems to connect with the viewer. What I find most touching about this picture is the slightly ill-fitting swimsuit which looks as though it may be cut for a slightly more developed figure, damp at the bottom suggesting she’s just come out of the sea but hasn’t been swimming. 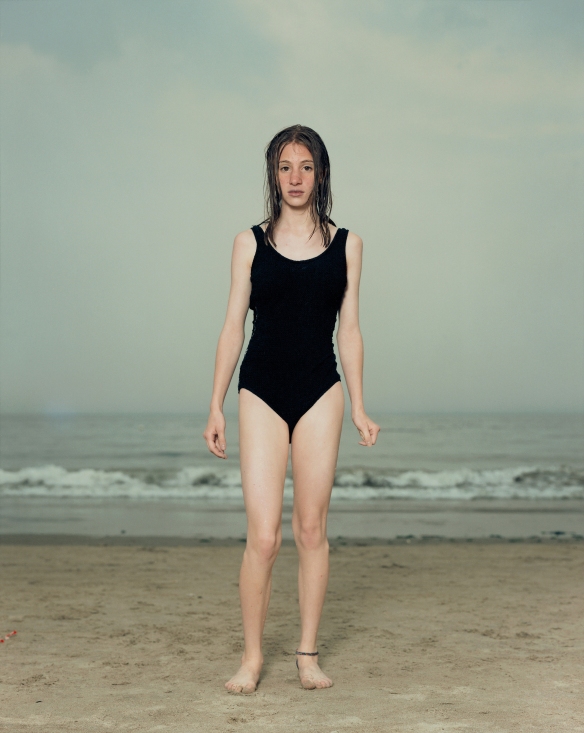 The two portraits of girls on American beaches, Coney Island, NY, USA, June 20 1993 above and Hilton Head Island, S.C., USA, June 24, 1992 below, suggest that the two teenagers have very different backgrounds. The girl at Coney Island, whose hair is lank from swimming, wears a swimsuit which looks cheap and (just about) functional. Her Hilton Head Island counterpart looks very different. Bikini-clad and wearing make-up, this girl looks like she’s at the beach to pose rather than to swim. Though her gaze is direct there is a look that suggests that, of the three, she is the most anxious to control her image in the picture. It’s easy to make assumptions about the relative affluence of the subjects and the type of lives they might lead based in the image titles, which record the location of the image.

I think what interests me most about this series is the way Dijkstra portrays the shared experience of young girls. For all the differences in the way her subjects present themselves in front of the camera, these are girls at the edge of the sea – wild and unforgiving – and the edge of adulthood which could be described in much the same way.

2 thoughts on “On the edge”