The idea of the digital composite that Idris Khan uses to such great effect isn’t a new one by any means. Possibly somewhat surprisingly it goes back several decades, with Nancy Burson – who had been involved with Experiments in Art and Technology (EAT) since leaving college in the late 1960s – making composite portraits digitally in the early 1980s. Composite photographic portraits of course have a much longer history – Francis Galton’s composites of criminal types were made in the late nineteenth century for instance – but the use of digital is something Burson pioneered.

It’s not all about the technology though. Indeed, it’s as art that Burson’s work interests me more. In building her composites, Burson is effectively making layered photomontages and accordingly her work can be seen as the combining of two (or more) elements to reveal a third meaning. In Warhead I, Burson has combined the imagges of world leaders accoring to the percentage of the world’s nuclear arsenal they had at their disposal. This being 1982 that effectively mean merging the faces of Leeonid Brezhnev and Ronald Reagan. Though in a way this makes me think about the significance of nuclear weapons during the Cold War it’s also interesting that it seems to come from a simpler time. How many faces would be in the mix now? And would anyone be able to accurately pinpoint the percentages?

In her Beauty Composites, Burson is creating average Hollywood stars for the 1950s and the 1980s by merging the faces of the actresses of each decade. Though it’s tempting to try to unpick the images and figure out the impact of the different faces on the whole, it’s striking to see how ideals of beauty shifted over time with the very different face shapes particularly noticeable. Though I think individually the 1950s’ actresses are more beautiful than their 1980s’ counterparts, for me the 1950s’ composite just doesn’t quite convince as a great beauty, she is however more striking and more memorable than her 1980s equivalen.

In Evolution II a man is combined with a chimpanzee. As Burson herself asks “Haven’t you ever wondered what the missing link looks like?” This is an image that gets its pointt across in a very straightfoward way with a simple humour. 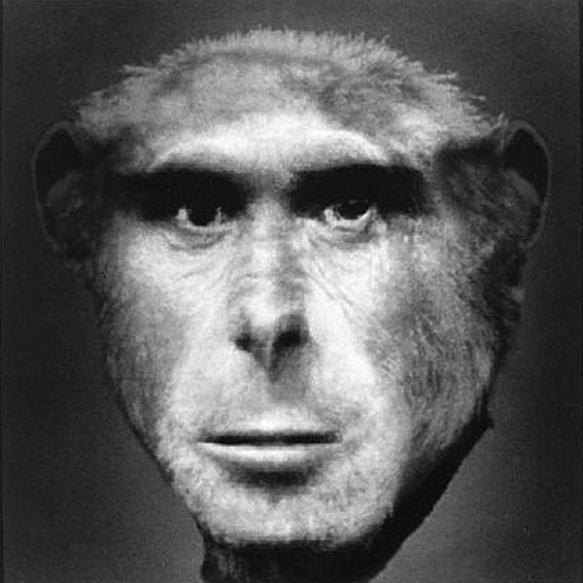 To bring it back to the technology though, this is digital imaging done the hard way though. When Burson made these images suitable image manipulation software wasn’t readily available – yes, there really was a time before Photoshop – so work of this nature was required specialist computing knowledge and facilities. Burson worked with Richard Carling and David Kramlich – engineers from MIT and involed with EAT – to produce the work and eventually collaborating with Kramlich to produce the software used by the FBI to age suspects, the idea off creating an Age Machine having been one of the things that got Burson involved with EAT in the first place. In the decades since these pictures were made, Burson has continued to make fascinating and highly effective work, using digital image making as a way to challenge prejudice. The technology may be complex but it’s the simplictity of Burson’s approach that gives her work its power.