When I think about the role of art – if it can be said to have one – I think I fundamentally see it as holding a mirror up to the world. I guess this means art tells us stuff me already know, it just switches things around a bit, creating familiarity tinged with an oddness that somehow focuses the mind. Having just written that, I’m inclined to think it proves I probably shouldn’t think about the role of art at all. It just makes me spout art crap.

So if I can’t think about how art works, perhaps I could consider mirrors without descending into pretention, cliché or even pretentious cliché? Probably not. But I’m going to do it anyway.

Hreinn Fridfinnsson’s Attending uses a mirror as a simple means of exchange of information. Ground and sky are swapped and the result is a pair of photographs that just makes me smile. I think it’s the blue sky with the fluffy white clouds that does it. They’re somehow just so pleasing. 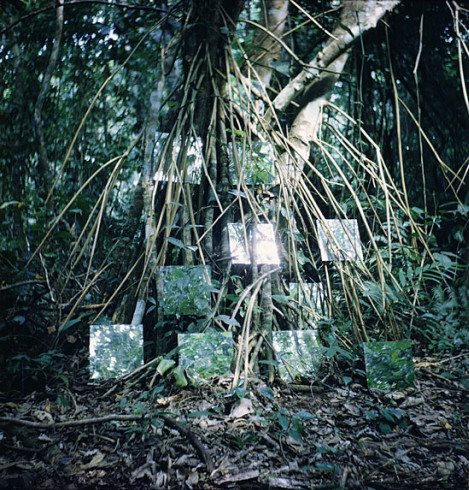 Robert Smithson’s placement of mirrors in the landscape created distortions of space and, to an extent, of time, with the photograph fixing the ever changing reflection. The mirrors create gaps in the scene but add an extra layer of information about the surroundings. The land is displaced to make room for the sky.