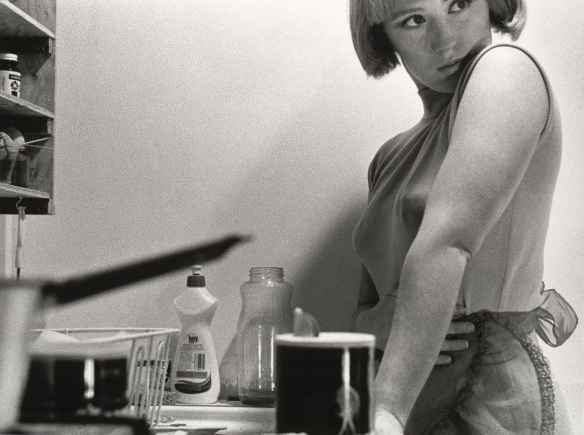 By way of description, the image depicts a domestic scene in which the character – seemingly a housewife – stands at her kitchen sink. The construction of the picture hints at a number of possible narratives and is open to a range of analyses. Though almost cropped from the picture, the woman’s gaze – out of frame and away from the viewer, accentuated by eye makeup surely unnecessary in her own kitchen – holds my attention.

There is a suggestion of the sexual, backed up by the phallic nature of the out of focus saucepan handle pointing towards her breasts. The woman’s gaze indicates an awareness of the world beyond the confines of the frame; the way her hand rests protectively on her stomach suggests the possibility that this is not without threat, creating a tension within the image which I am a part of. As the viewer, am I intruding on the scene with the potential to defuse the tension or I am the source of it?

For me, though the image offers a portrait that I read as a stereotypical representation of a housewife from the late 1950s or early 1960s, my familiarity with the stereotype emanates – as Sherman presumably intends – from Hollywood cinema rather than first hand experience. Though there is arguably a relationship with British kitchen sink melodrama, there is something about Sherman’s character – whether it is her posture, clothing or that eye makeup – that makes her seem specifically American and suburban. She could be seen as a typical Hitchcock blonde; the scenario certainly carries an appropriate sense of drama. As the viewer I am clearly not the subject of the woman’s gaze, nonetheless I have a sense of unease about my place in the narrative. The slightly low angle of view places me in some way in the scene rather than outside it but there is an ambiguity about whether this is as an unseen observer or as a guest at her kitchen table. Is this voyeurism or shared domesticity? Does my gaze make me complicit in objectifying Sherman’s character or give me space to challenge it?

8 thoughts on “In the kitchen with Cindy”