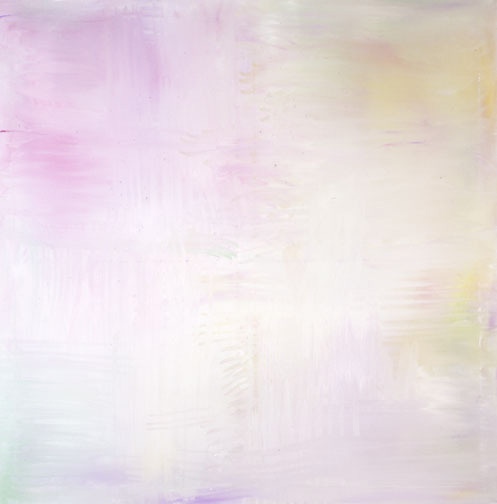 A new year and a new resolve to write about art (and yes, there are plenty of other resolutions I should be making and maybe I will, but I promise not to talk about them here; it’s for the best). And when better than New Year’s Day to think about what a hangover looks like? Wilhelm Sasnal’s Photophobia (on show at the Whitechapel Gallery until, ooh, later on today) isn’t intended as the abstract painting it initially appears to be. Rather, it’s an attempt to record that first blast of light that invades your consciousness when waking with a bad hangover. The light in the painting is intense and beautiful but its beauty doesn’t mask the pain it depicts. Like more than a few others in this show, this is a painting I could contemplate for a long time. The delicacy of the colour palette and use of paint are beautiful and, viewed as an abstraction, these perhaps transcend the subject matter, but the slightly nauseating colour that bleeds into the painting from its edges and the jarring brightness of the light brings the pain home and reminds me why I seldom drink to real excess these days. [And if your waking moments this morning looked a bit like Photophobia, well, drink lots of water and perhaps have little lie down. Then, if you feel up to it, perhaps see whether you can turn the experience into art.]

Wilhelm Sasnal is an intriguing artist. He uses painting to address subjects – politics, history, family and popular culture for instance – that we tend to see as being the prerogative of photography now. Though we all know that photographs can be – and routinely, are – manipulated, we still read them as holding a truth of sorts; something we don’t expect of painting. Sasnal’s use of photographic source material is often very clear but the transformative power of paint adds a new veracity and lets us contemplate the familiar afresh. The Whitechapel exhibition, a significant survey of Sasnal’s career to date, demonstrates the overarching coherence of his practice – something I have previously questioned having seen smaller shows or single works in group shows – despite the variety of his subject matter and the range of approaches to painting he employs.

In recent months in London, we’ve been spoilt for choice for contemporary painting and particularly for work that deals with often difficult subject matter in extraordinary ways, with exhibitions by Gerhard Richter (at Tate Modern until 8 January) and Anselm Kiefer (at White Cube Bermondsey until 27 February) still on show and one last chance to catch Sasnal’s exhibition at the Whitechapel today. Whether this trend will continue in 2012 I don’t know (admittedly Google would doubtless be my friend should I choose to try to find out) but it’s hard to imagine a better selection shows to see in relation to one another.