The Damien Hirst exhibition at Tate Modern offers both a welcome(ish) chance to revisit Hirst’s early work and be reminded that he did start out by making some genuinely challenging and interesting work and a less welcome opportunity to see some of the most extreme art bling one is ever likely to encounter. Most obviously, there’s that skull. For the Love of God has generated so much press it’s not really possible to be all that surprised by it. Nonetheless, it’s a strange experience.

The work is on show in the Turbine Hall rather than as part of the exhibition. This means that what is surely one of the most costly artworks ever made can be seen for free assuming one is prepared to queue. Thankfully, on my visit at least, the queue was quite short. A security guard at the head of the queue was asking people to open their bags and, in theory at least, large bags must be left in the cloakroom. In the room – small and unlit apart from the lighting directed at the work – a few people jostled for position around the glass case containing the skull. The room was quiet; somehow the work and the setting inspired people to speak in whispers.

But what of the work. Well, as to that, I couldn’t quite decide. It’s ludicrous, of course, but it’s also strangely beautiful. But while I know it to be real, I’m not sure that I’d have assumed the stones to be real diamonds without that knowledge. And while it may be beautiful it’s also unavoidably tacky.

More interestingly though the work speaks of the value of art and of the intricacies of the art market. The work cost an enormous amount to make of course, but the reported price of £50m would make it the most expensive work by a living artist. But of course the art market isn’t that simple. And Hirst is as much a showman and businessman as an artist, and truth is the first casuality of pretty much anything utterly game-changing. So was the skull sold at all? And if so, was Hirst himself the buyer? And, though I do find the art market interesting and weird and worth a certain amount of attention, why should we care?

In the Hirst exhibition there’s one work that above all others made me wince and wonder why no-one ever tells Hirst it’s time to stop and think. Judgement Day is one of the mirror backed cases with row upon row of glass shelves that Hirst has used to good effect in other works, such as Where There’s a Will There’s a Way which Hirst donated to an auction for AIDS charities and which contained the drugs that form the combination therapy that has made such a difference to the life expectancy of those with HIV. 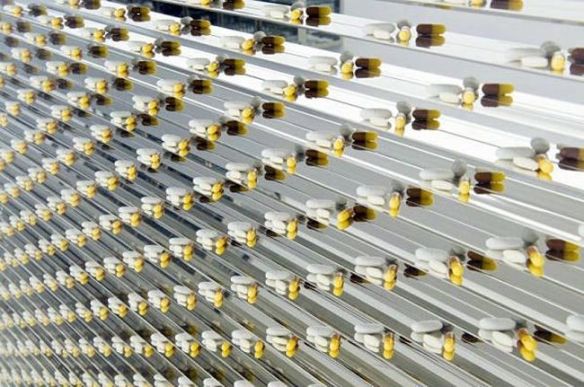 Except that rather than containing drugs, Judgement Day one contains cubic zircona crystals. And the case and mirror are gold. There’s really no excuse for that. This work is pure bling and it really takes tacky to new levels.

Damien Hirst is at Tate Modern until 9 September 2012